SIPA recognized several individuals for service to the organizations at the annual convention held March 6-8, 2020 in Columbia.

Three individuals were honored with the Elizabeth B. Dickey Distinguished Service Award (DSA), which honors advisers who have contributed extraordinary amounts of time, talents and energy to SIPA.

Sue Gill, retired Virginia newsprint and yearbook adviser, is recognized for her passion for scholastic journalism, her commitment to being a life-long learner and her willingness to help others.

Valerie Kibler, Harrisonburg HS (Virginia) newsprint and online adviser, has “always been impressed with Sue's volunteer spirit, her desire to get better and the decades of students she has impacted so positively.”

“Each year, she pays for her own flight to the convention and works the book sale tirelessly in order to raise money for the Endowment,” Leslie Dennis, Director of Scholastic Media, said. “She asks how she can help and always has a smile on her face. Whenever you see her, she is on her way to do something, is doing something or has just completed a task.”

It’s safe to say that she is a tireless worker. Her volunteer spirit and desire to improve are a few of the many reasons why Erinn Harris, Thomas Jefferson HS for Science and Technology (Virginia) newsprint and yearbook adviser, described her as “a legend. Anyone who meets her knows that she has a passion for scholastic journalism, and will do anything to further the cause."

With a career that spanned more than 50 years, Gill “is a staple in Virginia and someone who exudes the spirit of SIPA,” Meghan Percival, McLean HS (Virginia) yearbook adviser, said.

Steve Hanf, newsprint, online and yearbook adviser at First Flight HS (Kill Devil Hills, North Carolina), majored in journalism and became a reporter. But he wanted to share his love of journalism with student.

“He believed if you build it, they will come," Martha Rothwell, Steve's former JEA mentor, said. "And so, it has. He has built strong journalism programs and the students have come to it.”

He continuously hones his skills by serving as president of the NCSMA board, co-directing the North Carolina Scholastic Media Institute news outlet, and teaching sessions at regional workshops and camps.

“He has instilled in [his students] the hunger to learn what it takes to produce quality journalism, from every opportunity,” Rothwell said.

When he was asked to serve on the SIPA executive committee, Rothwell said that “he did not ask how much work it involved, but he readily accepted the position. He is always looking for ways to make SIPA bigger and better.”

"He is someone who has worked in the field, pursued the opportunity to teach and devoted himself to encouraging others to do the same,” Hill said.

Melanie Huynh-Duc, newsprint and online adviser at Northwest Guilford HS (Greensboro, North Carolina), is recognized for her passion for teaching and equipping her students to be respected journalists.

“Some people are born to be teachers," Martha Rothwell, Huynh-Duc's former JEA mentor, said. "Melanie exemplifies all that defines a person who has been born to teach.”

When Huynh-Duc was tasked with teaching journalism, she immediately decided that she must be the best she could be as a journalism educator. To educate herself, she attended NCSMI before she began teaching. Next, she attended the SIPA and the JEA conventions, where she received the JEA Rising Star Award.

“She approaches her scholastic journalism career with a quiet determination," Hill said. "She is a champion of student expression, and she elegantly defends it.”

Her journalism program is noted for consistent quality and respect, and her students are regarded for their attention to detail and their storytelling process.

Not only does her staff produce awarding winning publications, but they also cover tough social issues – often simultaneously benefitting their publications and distressing their principals. They never compromise their First Amendment rights, and even won the SIPA Joseph W. Shoquist Freedom of the Press Award.

“Her students know that she genuinely cares about them," Rothwell said. "The relationships that she has built with her students continue long after they graduate. Her smile is contagious and her positive attitude is reflected in all who are around her.”

Also, SIPA honored Jeff Watkins from Mt. Pleasant, South Carolina, with the Karen Flowers Outstanding Service Award. The OSA goes to an individual who has contributed extraordinary amounts of time, talent and energy to scholastic journalism.  Jeff is described as “the goon, the machine, the answer, the franchise, and the GOAT."

While he is not currently involved in the professional realm of journalism, his scholastic journalism career in both high school and college helps him understand the “importance of students having a voice and learning the skills that come from newspaper and yearbook production,” according to his wife and Wando HS newsprint and online adviser, Tammy Watkins.

He has been a chaperone on numerous occasions for his wife’s journalism field trips. He always supplies emotional support to students who are hurt, crying or disappointed, one nominator said.

“Sick kid who needs to go back to the hotel? He has ‘em. Need someone to check our group in at the restaurant? He is there. Count our students every time we have to regroup? He is on it,” Phillip Caston, Wando HS yearbook adviser, said. “If you’ve had to lead a group of students anywhere to a conference, you know how valuable an attentive and selfless chaperone can be to your trip.”

And it’s not just the kids he looks after. He keeps the adviser, his wife, in check as well.

“If she wanders off when she sees something shiny at Disney World, he brings her back," Caston said. "If she spots a Gamecock football player on campus, he prevents her from tackling them. And if she gets upset or frustrated with that pushy other adviser guy who gets a little too Type A on field trips, he’s there to prevent her from murdering him.”

He is described as this group’s rock and the kids “know him, trust him and adore him,” one nominator said.

“When a man who isn’t a teacher and doesn’t really have to be there gives up his spare time for them, the kids understand just how much they mean to him,” Caston said. 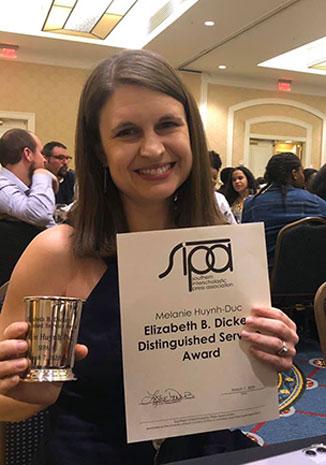 Check out photos of all our winners!

In their own words...

"She is always cheerful and spent decades building up a journalism program at Stafford HS. Her dedication to SIPA is renown!"

"The staff covered and published information about the city council discussion of plans for the community park beside the high school before the local media had their coverage out to their readers. When the yearbook adviser resigned, Steve stepped up to take the program although he had no yearbook background. Again, he found success."

"Melanie offers them instruction in and understanding of design fundamentals that allow them to create inviting publications year after year. She is a champion of student expression, and she elegantly defends it."

"The world could use a few more Jeff Watkins. He’s always there to help, no matter, what and his willingness and eagerness to help the staff of the Tribal Tribune can not be possibly overstated. Jeff Watkins truly is an icon, an outstanding husband, a wonderful father, and a perfect role model."