The Faber Entrepreneurship Center was established in 1997 following a gift to the Darla Moore School of Business from Tim and Karen Faber, two USC graduates and successful entrepreneurs.

The Fabers' tale began in December 1983, when Karen graduated from USC with a double major in marketing and finance and Tim earned a Carolina degree in science and mathematics. Karen moved back to her home state of Texas to be a banker, but soon relocated to Washington, D.C., where she went to work for a nationwide "temp" service and ended up managing all of the firm's Maryland offices. Later she moved back to South Carolina to open an office for that company.

Tim, meanwhile, had taken a job with IBM in Columbia, marketing large mainframe computer systems. The couple met during one of her sales calls. It had been a little more than three years since graduation. Even on their first date, the conversation revolved around business. "He looked at me and said, 'So, if you had the money, would you start your own company?'" Karen remembers. "And I said, 'Yes.'" Tim shared that he had read that the temporary staffing industry was one of the country's fastest-growing industries. And, because of her experience, Karen knew all about it.

The two spent the summer of 1986 working on a business plan at night while working at their regular jobs during the day. By October of 1987, the couple was ready to take the plunge. They quit their jobs, cashed in their savings and retirement funds, borrowed money from family and friends, and opened the first U.S. Personnel office in Greenville, South Carolina.

The first three years went well, as they invested most everything back into the business and were able to expand to seven offices in three states. They then survived a couple of "very thin" years during the recession of 1991-1992. When the economy picked back up, U.S. Personnel began to thrive.

By 1996, when the Fabers sold the majority of U.S. Personnel to a Dallas firm, the company had 19 branch offices and was generating approximately $60 million in annual revenue.

The Fabers view the center as a vehicle for encouraging entrepreneurship in South Carolina. Tim said, "I want to see a powerful mechanism that will allow people, for whatever their reason, to own, run and manage a business. If we can contribute to making small businesses more successful, it will help the economy. I think I could sit down with a group and help them save millions of dollars by what we've learned along the way." 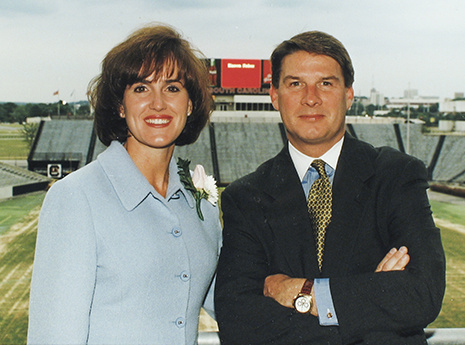 Karen and Tim Faber, whose contribution supported the 1997 establishment of the Faber Entrepreneurship Center.