The University of South Carolina and the United Nations Educational, Scientific and Cultural Organization announced an agreement in principle Friday to establish the UNESCO Chair for Data, Media and Society in the College of Information and Communications. There are currently 21 UNESCO Chairs in the United States — pending approval from the Board of Trustees, South Carolina’s will become the 22nd.

The chairholder will study the social and ethical challenges posed by misinformation and disinformation, with an emphasis on social media.

“This is an opportunity for us to better understand the proliferation of mis- and disinformation, and ultimately, to help curb it worldwide,” says CIC Dean Tom Reichert. “We are incredibly honored to partner with UNESCO and join the ranks of the esteemed universities who host one of their chairs.”

The agreement was announced at the conclusion of the Information Saves Lives forum, an international discussion on media freedom, disinformation and hunger. In addition to UNESCO Director-General Audrey Azoulay and UofSC Interim President Harris Pastides, the forum featured former South Carolina governor David Beasley, who is now executive director of the Nobel Peace Prize-winning World Food Programme. School of Journalism and Mass Communications alumnus and ABC News correspondent Kenneth Moton moderated the event, and journalists Maria Ressa with Rappler and Glenn Smith with The Post and Courier provided remarks virtually.

Discussions focused on press freedom and the role journalists play in saving lives by drawing attention to human rights violations, hunger and other issues.

Beasley urged media to dedicate more time to covering humanitarian crises. He shared an anecdote about a blockade on the border of Yemen several years ago that halted World Food Programme’s efforts to feed 13 million people. An exposé by 60 Minutes helped turn the tide.

“That was a classic case where the media helped us save millions upon millions of lives,” Beasley said.

Social media’s potential as a force for good — or for chaos — was also one of the forum’s central themes. Azoulay emphasized the importance of media literacy, particularly as society grapples with Big Tech’s growing influence over the sharing of information.

Ressa, who has fought against online disinformation in the Philippines, warned that social media can fuel extremism. She cited the storming of the U.S. Capitol on Jan. 6 as an example.

Though the forum explored challenges and threats facing today’s journalists, it ended with a hopeful message about the role South Carolina’s UNESCO Chair will play in gathering the necessary data to develop evidence-based policies designed to counter the spread of disinformation.

“We need a close link with society, and especially with research, with universities, with academia, with the professional link to our mandate in culture, in science, in education,” Azoulay said. “This link is really precious, and what we have with universities is a network of university chairs that provide ideas, that provide work, and this is the kind of partnership we are now building with the University of South Carolina.” 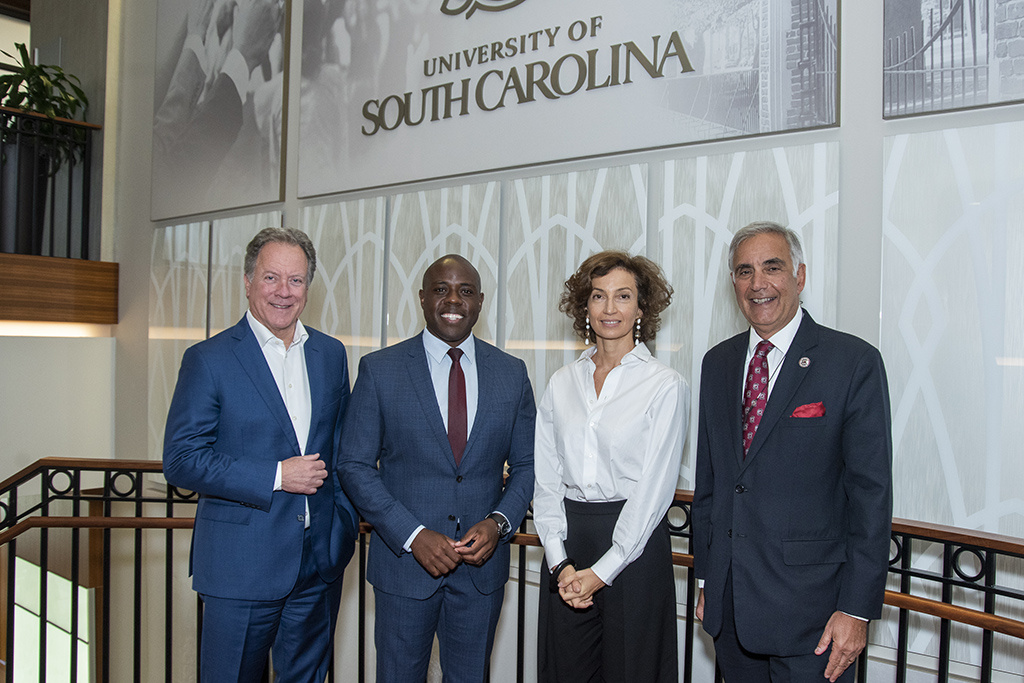 Images from the forum.