Insights Index: Can buzz be bought? Where Bloomberg, Steyer and the other candidates stand in South Carolina

Wealthy Democratic presidential candidates Michael Bloomberg and Tom Steyer are spending a lot of money to promote themselves in South Carolina and it is being reflected in political polls, but a new analysis by the University of South Carolina Social Media Insights Lab shows that neither of them are being discussed very often on social media in the Palmetto State.

Bloomberg and Steyer don’t fare much better in terms of the sentiment expressed in these conversations. Using artificial intelligence to analyze almost 54,000 posts, the lab found Bloomberg ranked last in positive sentiment among the 10 candidates. Steyer was tied for eighth with frontrunner Joe Biden.

“We are witnessing whether it is possible to repave the traditional road to the White House,” says lab analyst Sam Johnson, a former strategist for Columbia Mayor Steve Benjamin. “Bloomberg, and to some degree Steyer, are employing never seen before strategies to try to win a presidential primary. Historically, there has been a set resume that a candidate must achieve before being considered qualified. The election in 2016 and this primary have shown us that we’re not going back to tradition.”

Real Clear Politics’ top ten-polling candidates, as of Dec. 31, were:

Yet in South Carolina, social media “buzz” doesn’t reflect the same pattern as the polls. While Bloomberg and Steyer have spent substantial campaign dollars in the Palmetto State, they do not have a significant social presence. In fact, from March 1 through Dec. 31, 2019, Tom Steyer’s total share of voice among candidates was less than 2 percent, and Mike Bloomberg’s total share of voice was less than 1 percent. In December, Steyer’s positive social sentiment was about the same as Joe Biden’s, and Bloomberg’s positive social sentiment was less than the former vice president’s.

“Our findings suggest that name recognition, which can lead to high poll numbers, does not necessarily equate retention or popularity,” says lab manager Kaitlyn Park. “While advertising dollars can generate name recognition, we are not seeing organic adoption of either Steyer or Bloomberg on social media. There simply isn’t a ‘buzz’ among social users in South Carolina about these candidates. They trail in total mentions and positive sentiment.”

Andrew Yang, Tulsi Gabbard and Cory Booker were nearly tied in their share of voice in December. When combined, they make up for about the share of voice Kamala Harris occupied before dropping out of the race. These three candidates also have the highest positive social sentiment. Andrew Yang had the highest in December, followed by Booker and then Gabbard.

While Booker did have an active and enthusiastic base in South Carolina, the New Jersey senator announced he was dropping out of the race on Jan. 13. His share of voice was slightly outranked by Amy Klobuchar’s in December, but she has never surpassed Booker in positive social sentiment. The competition for the number five spot based on social media popularity continues and deviates from national and state polling.

“It will be interesting to see if Andrew Yang can turn his positive social support into consistent popularity,” Park says. “Currently, his social media fanbase is younger and a bit more male than female. Similarly, early on, Pete Buttigieg had an excited following in South Carolina that was small in total volume. But over time that has grown from general curiosity into substantial support, as we saw in our previous release on top candidates on social media in the state.”

Since March, the lab has analyzed more than 522,487 posts about the leading Democratic candidates, nearly 67,603 of which were in December. This report comes from publicly available data generated from Crimson Hexagon. The sample is predominantly Twitter data, followed by blogs, forums and some public-facing Facebook content.

As South Carolina approaches the Feb. 29 primary election, the Social Media Insights Lab will continue to monitor how candidates fare in the digital world and how this deviates from polling numbers. The lab will also investigate bot activity and how it contributes to the conversation about the Democratic candidates. 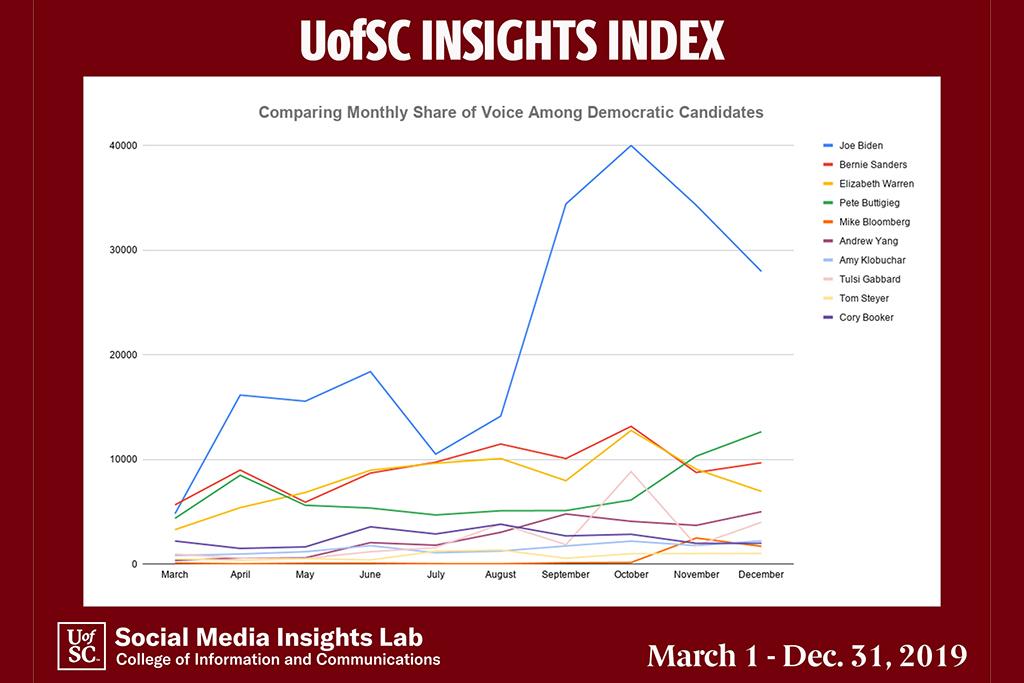