ESPN executive tackles the subject of football and brain injuries

Football is America's favorite sport for a number of reasons. We love the game, the excitement, the stakes, and the head-to-head competition. It is a billion dollar industry fueled by our intense passion for the sport.

The only thing more intense than America's passion for the sport may be the way it is played. Football wouldn't be football without speed, long touchdown passes and fierce tackles. But what are those tackles doing besides ending the play? What happens to a player every time he's hit?

ESPN's Outside the Lines series has exposed the harsh truths of brain injuries in football. Dwayne Bray, senior coordinating producer on the ESPN Television Enterprise Reporting Unit, discussed the findings at the journalism school's Baldwin Business and Financial Journalism Lecture. The lecture series is part of an endowment established by alumnus Ken Baldwin, Jr.

"We try to use [ESPN's] impact for more than just highlights and game coverage and discussion shows," Bray said. "We try to use that impact for serious journalism." It's a delicate balance since ESPN profits considerably from broadcasting NFL games, while its investigative unit reports on the risks of the game.

That's meant reporting about chronic traumatic encephalopathy, also known as CTE. CTE is a degenerative brain disease caused by head injuries that has been linked to the deaths of numerous football players. Bray focused on the suicide of Junior Seau, one of the greatest linebackers in the history of the NFL, who shot himself in the chest after struggling with CTE, preserving his damaged brain for study.

Seau's CTE was caused by explosive blows to the head over, and over, and over again. The hits were not monitored. No one was there to stop it. According to Bray, it was "the way you play the game." But the game took his life.

"The football industry tried to hide the truth for years," Bray said. "But papers showed that they had been compensating millions of dollars to players for head related injuries for years."

An avid football fan, Bray doesn't want to put an end to the sport. His goal is to educate coaches, players, parents, and the public about the risks of tackle football. Bray emphasized the importance of educating youth football teams. Children's football teams don't have doctors and trainers waiting on the sidelines to tend to every injury. No one is protecting them the way college and professional football players are protected.

"Statistics show that the brain is still rapidly developing until 14," Bray said. "Why can't we play the sport a safer way that isn't going to potentially harm our children?" 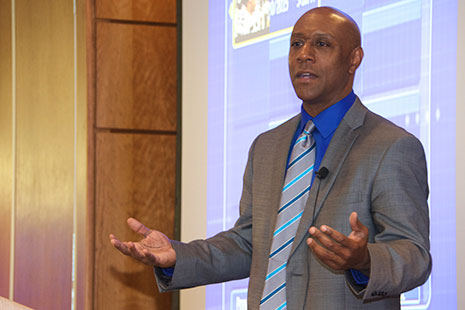 Excerpts from Dwayne Bray's lecture on football and brain injuries.