Twelve USC broadcast journalism students took park in the Radio Television Digital News Association of the Carolinas workshops in Charlotte on Saturday, February 21.   They were were among 108 students from colleges and universities from North and South Carolina at the day-long event held in the WBTV newsroom and studios.

The students took advantage of sessions covering topics such as reporting, anchoring, producing, weathercasting, sportscasting, photography, Web producing and landing a first job.   The sessions were moderated by veteran news directors, educators and broadcast news professionals.   They also had a chance to have their work critiqued in individual, one-on-one sessions by those professionals.

During the opening session, senior broadcast student Charles Ringwalt was named winner of the annual RTDNA-C scholarship for South Carolina.   The RTDNA-C awards two scholarships each year, one to a student from a school in North and South Carolina.

The student workshops are held annually to give broadcast students from around the two states the chance to meet and talk with people in the news business, learn new skills and get advise on how to land their first jobs and how to prosper in broadcast and online news.

The sessions are sponsored and hosted by the Radio Television Digital News Association of the Carolinas.  The Association is the largest regional organization of broadcast and digital news managers and educators in the nation.  The group also presents annual awards for top television, radio and online reporting professional and student work. 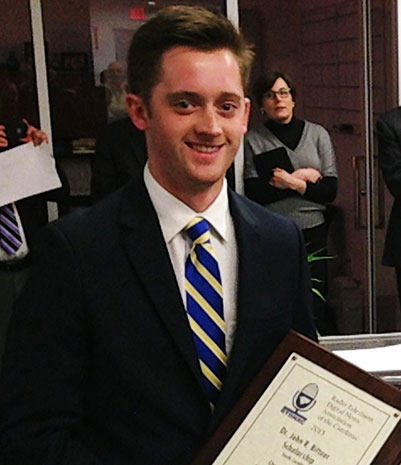 Chuck, as he’s known to his friends, is from the Philadelphia area where he interned at WPVI-TV.

Not only is he part of the daily newscast team in the broadcast Senior Semester program, he also works part time as a photographer and assignment editor at WLTX-TV in Columbia.

The judges at the RTDNA-C agreed with one of the people endorsing his application who said, "Not only is the scholarship an honor Charles deserves, it’s one he has earned.”