Giving a voice to the voiceless

Jaimie Falke Devita has always had a passion for urban and inner-city culture. She now pairs that passion with her love and talent for graphic design at her job. Working for a nonprofit, many of the images and graphics that Devita produces play a vital role in raising awareness and money for the organization.

Her work goes far beyond her skills with InDesign and Illustrator. At the end of the day, her job is about real people and giving those people hope in the midst of their difficult situations. “Through photography and design I am no longer just talking about this demographic of people, I am able to put names and faces to what we are doing,” says Devita. “Kids that wouldn’t normally have a voice get to have a voice now."

The 2011 visual communications graduate points to the knowledge gained in her infographics class with Scott Farrand as extremely valuable to what she does today. “What I always remember from that class is the need to get as much information, in a small space, with as little words, and as clear a presentation as possible,” says Devita. “I think back to that class all the time; I remember everything I did for that class.”

Devita’s work puts her in direct contact with the high school students the organization attempts to reach. She builds relationships with and mentors students giving them a hope for their future. “These kids just want someone to care about them,” says Devita.

As a result, she knows the kids, she knows their stories, and she knows the neighborhoods they come from. “Jaimie is someone who is always there, who accepts me for me, and doesn’t judge,” said one of her students.

The stories that Devita shares through her work are not only about raising more money or making people feel good. If

it stopped there, the stories would only perpetuate the stereotypes that she works to erase. “Everything that we design has purpose and meaning, it’s not just about what looks good on a page,” says Devita. “It’s about giving these students a voice and a hope.” 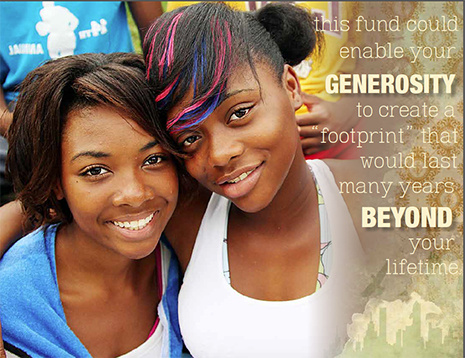