No running water and no electricity, running on the sun instead of time. Zachary Blankenship prepares for a day spent harvesting rice and teaching English. Looking at his surroundings, he never thought that he would find himself here, Cambodia.

Blankenship is a 2013 graduate who majored in public relations. Applications and resumes were not on Zac’s mind upon graduation. Instead, he flew to Southeast Asia.

“Before I could be effective in a job, I wanted to know who I was,” Zac said. “And what better way to learn who you are, than to be completely submersed in an environment of who you are not.”

One day, while walking the streets of Kampong Cham, a boy approached Zac asking for money. Instead, Zac gave him food. The boy’s name was Dara, one of 12 children living with his family in the slums. Dara was 4 years old. While his father was working, his stepmother was cruel to Dara. She told him he had to leave the house at sunrise and only return at sunset. If he were any earlier, or later, he would be punished.

Zac took him home, but it was after sunset. Driving off, Zac could hear Dara being beaten by his stepmother. Unable to help, Zac prayed.

“My heart didn’t just break for Dara,” Zac said, “but for Cambodia.”

The next morning, Zac found Dara sitting outside of the hostel. Dara then stayed with Zac and his mission team. At the end of the trip, Zac was able to find an orphanage for Dara to live in. Leaving Cambodia was tough for Zac. He fell in love with the people, the culture and Dara. He knew he had to return.

In June of 2014, Zac left for his second trip to Cambodia to go to mission school at the University of Nations in Battambang. This trip was different. Zac was completely immersed in the Cambodian language and culture, constantly surrounded by people who spoke little English.

During a month of outreach, Zac lived in a rural village in the province of Pursat. The closest school was more than 30 miles away.

“By the time the children are physically capable of walking 30 miles, they are too far behind in school,” Zac said. “Every child becomes a farmer, so there isn’t hope for more.”

Zac hopes to return to that village to build a youth development center.

At the end of his trip, Zac was able to visit Dara in the orphanage. Having learned some of the Khmer language, Zac spoke with Dara. The headmaster of the orphange told Zac that Dara ran away daily for the first month. When Zac asked Dara why he ran away, Dara said, “I was looking for you.”

Zac’s trips to Cambodia are documented through his blog, justlovecambodia.tumblr.com. Zac was able to write about his experiences and share pictures and videos with supporters back home.

A communications degree doesn’t always lead to a corporate job. In Zac’s case, it led him to Cambodia.

“Journalism is more than a career,” Zac said. “It’s a way to impact or encourage others through your words."

Editor's Note: Zac Blankenship is now back in America preparing for his next trip to Cambodia. He and the story's author, Logen Hall, are getting married in June and plan to spend their summer looking for a permanent home for their nonprofit, Just Love Cambodia. 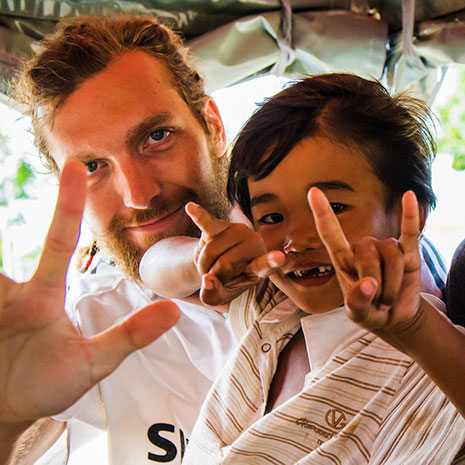 Zac Blankenship, PR '13, submersed himself in life in Cambodia after graduation to learn more about himself. While doing so, he impacted the life of Dara, a young boy from an abusive home.