"Doing the program at USC I realized that I was interested in a communications career in the health field," said Lamberson.

Not only did she obtain an M.M.C. degree but she also completed USC's interdisciplinary Certificate of Graduate Study in Health Communication.  She says the M.M.C. program is unique because students are able to customize their program of study and choose classes that will prepare them for the real world.

"Classes at USC, such as media law and marketing management , really prepared me for some issues that I have to deal with on a day-to-day basis. I would have never known about that had I not taken these classes at USC," said Lamberson.

And during her last semester, she was able to pursue her interests in health communications even further. She participated in a professional practicum experience at the South Carolina Campaign to Prevent Teen Pregnancy and then landed a full-time position. This past August, she started a position at the South Carolina Hospital Association (SCHA) as the communications manager.

"My position at SCHA has allowed me to take a leadership role when it comes to communicating to the public about all the good things happening in South Carolina hospitals," said Lamberson. "There are so many ongoing projects, my role is to synthesize them for the public on our website, social media and when contacting the media," said Lamberson.

Lamberson is also using the communication-focused knowledge and skills she learned at USC outside of the workplace.  As a professional disc golfer, Lamberson says her communication expertise is a useful tool to help promote and pursue this personal passion.

"I recently got sponsored by Innova, the world's largest disc golf company," said Lamberson. "They were interested in me not just for my throwing ability, but also because I am a natural promoter. Give me a couple minutes, and I will talk your ear off about why everyone should play disc golf."

Lamberson said that the sport of disc golf is in need of more female players. Only seven percent of women make up the Professional Disc Golf Association. Because of her professional job as a media liaison, Lamberson said she is not afraid to get in front of a camera, get news articles written, and post on social media to get more women involved in the sport.

"I want women to know that they can play disc golf and excel without having to throw 400 feet like a lot of the men. It is a great sport to just play casually on the weekends, or if you want to get more competitive, there are tournaments happening every weekend around the country," said Lamberson.

Although a recent  graduate, Lamberson is already making wonderful strides professionally, while trying to change the world of sports through mass communication. She is grateful for the opportunities and said her success would not have been possible without the wonderful professors in the master's program.

"There were a lot of mentors, Dr. Andrea Tanner, Lisa Sisk, and a few others that really believed in me. They just helped me get to where I am today. They sort of took me under their wing and helped me realize my true potential," said Lamberson.

Rachel Tripp is a senior broadcast journalism major from Fort Mill, South Carolina. A recipient of the 2014 William Shafto journalism fellowship, she interned as a reporter at the NBC affiliate station WIS-TV in Columbia. She plans to graduate in May 2015 and pursue a career in sports or entertainment communications. 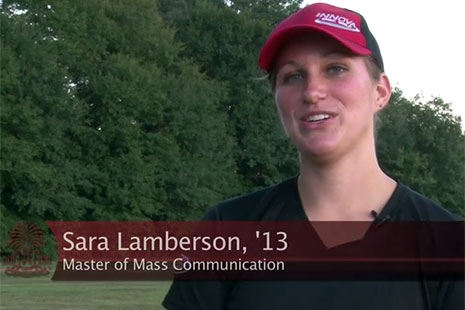 A professional disc golfer, Lamberson not only uses the communication-focused knowledge and skills in her career she also uses them to promote and pursue her personal passion.