Investigative journalism is not dead

Peppering his lecture with colorful language about his interesting past, USC alumnus Michael LaForgia stepped down off his Pulitzer pedestal by sharing clips of his run-in with police after a broken window incident following a Carolina sporting event. He admitted he became a journalist because of a story he read about a grocery store.

LaForgia also detailed his time spent at the Palm Beach Post working for a hard drinking, chain-smoking editor who stirred his morning coffee with the closest ballpoint pen. The dogs barking at the adjacent groomer’s when the trains rattled by on the double train tracks paints an honest picture of his humble journalistic beginnings.

Despite skeptics’ regular claims that local investigative journalism, especially print journalism, is a dying art, LaForgia opened his discussion with a myriad of examples of successful stories all of which went to print in the last 39 days.

“It has never been easier for talented young people to move up in this business, even at big papers,” stated LaForgia.

LaForgia emphasized the importance of continuing to push forward with a story if you, the journalist, believe in it.

Craig Anderson, first-year master’s student and assignment editor for Spartanburg’s local news station WSPA, agrees with LaForgia’s belief in perseverance through a difficult story. Anderson felt LaForgia’s speech was applicable not only to print media journalists but also members of broadcast journalism such as himself.

“Listening to LaForgia made me feel like I can excel in the communications field and make a difference somewhere for somebody.”

LaForgia is currently the investigative editor for the Tampa Bay Times, but he cites his time as editor-in-chief of the The Daily Gamecock as being one of the most valuable experiences he had as an undergraduate student at USC. He was not a journalism major, but as an English literature major he still learned vital writing and editorial skills needed in a successful journalist.

Despite all the good LaForgia’s prize-winning journalism has accomplished exposing the deplorable living conditions of the homeless in Hillsborough County, Fla., in 2014 and the re-segregation of failing schools in St. Petersburg, Fla., he humbly still questions his own impact for good on the lives of the people of the stories he covers.

As the years grind on and print media organizations continue to disappear, LaForgia fears he may inevitably join the ranks of the skeptics who believe local investigative journalism is dead. Young people, he emphasizes, however, will be the ones to carry the torch of important truth telling.

The Buchheit Family Lecture Series was created in 2000 in honor of the late Phil Buchheit, the former president and chairman of Mid-South Management Company and the former publisher of the Spartanburg Herald-Journal. The series is sponsored by the Buchheit Family Endowment, which provides undergraduate scholarships and graduate and doctoral fellowships to students of the university’s School of Journalism and Mass Communications.

Desirae Gostlin is a first-year Master of Mass Communications student. Her reporting has been featured in The Waterfront and Lexington Life Magazine among others. 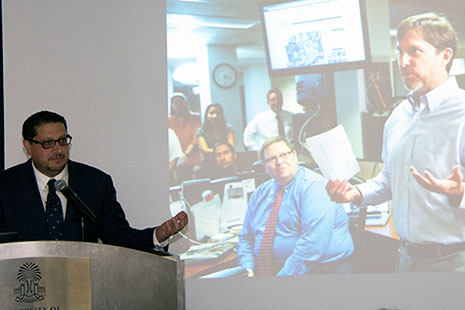