Posted March 17, 2016
By T. Michael Boddie, Reprinted with permission of The Daily Gamecock

Robinson is editor at large of The Boston Globe and led the team that uncovered the story of sexual abuse by Catholic priests. His lecture was titled, ‘Investigative Reporting: How Hollywood Came to Celebrate What Newsrooms Believe is No Longer Worth the Cost.’ He discussed the importance of the type of journalism that both the film and his true story highlights.

The Globe’s Spotlight Team, under Robinson’s leadership, investigated the story in the early 2000s until their research was interrupted by the 9/11 terrorist attacks. After weeks of covering that story, the Spotlight Team picked up the abuse story, and the first article was published on Jan. 6, 2002.

Over 600 follow-up articles were published in 2002 as more victims continuously came forward to make their stories public, and those articles went viral on the Internet. In the weeks after the first story, the Spotlight Team was contacted by more than 300 victims in the Boston area. Robinson asserted that most of the victims believed themselves to be alone in their circumstances and never told anyone what happened to them.

“It was the most emotionally wrenching reporting that any of us had ever done,” Robinson said.

"Spotlight" takes the work done by The Globe and, according to Robinson, makes it seem exciting. He stressed that uncovering the story was not as exciting as portrayed or as fast-paced.

“Yes, good investigative stories are riveting to read,” Robinson said. “But the reporting that goes into them is often boring, monotonous, tedious, stupefying, mind-numbing, sleep-inducing, even constipating.”

Robinson talked about the filmmakers and their methods for making "Spotlight" as authentically as possible. He kept many of the original emails and documents from the real-life investigation. The film even had a scene in which The Globe’s editor speaks the exact words from an email Robinson received from a real-life editor.

In 2003, the Spotlight Team won a Pulitzer Prize for public service.

“It was really interesting to hear from the side of journalism you don’t really get to see. I loved hearing about real investigative journalism,” Dishart said.

A Dutch Fork High School journalism teacher was also in attendance. Amy Medlock-Greene took note of much of the lecture.

“It was fabulous," Medlock-Greene said. "My students are doing their first stories, so I’ll be bringing up a great deal of this."

The message Robinson sent was about more than an award-winning motion picture. He stressed the importance of investigative reporting and the will to engage in it.

“And we don’t have to wait for a whistleblower to alert us to those stories. All we need do is look around us,” Robinson said.

While many large news organizations have decided that investigative reporting is no longer affordable, Robinson says that it is something they cannot afford to lose.

“When newspaper readers are asked in surveys what they care most about, it is investigative reporting — reporting that holds powerful institutions and individuals accountable," Robinson said. "If we do not do this reporting, who will?”

Robinson was a journalism professor at Northeastern University for seven years, and he was sure to impress the importance of investigative reporting on his students. He says that his students remain excited about it.

Timothy "T. Michael" Boddie is a first-year print journalism student from Tyrone, Georgia. He is a news reporter for The Daily Gamecock and Editor-in-Chief of the International House blog. 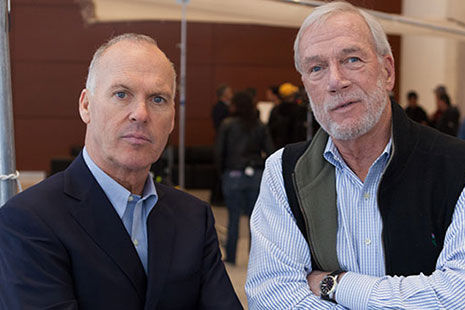 Photos from the Buchheit Family Lecture and reception.