Millennials and politics — what's their take on the recent election? Fake news? The immigration order? The challenges facing the nation?

WIS TV wanted to know what USC students thought; so they partnered with the School of Journalism and Mass Communications (SJMC) and conducted a forum on millennial post-election thoughts. The “Millennial Town Hall” was held in the SJMC Kennedy Greenhouse studio on Feb. 7 and was broadcast via Facebook Live.

“We frequently provide experiential learning opportunities for our students and the SJMC was pleased to partner with WIS for this important event,” said Dr. Andrea Tanner, director of the School of Journalism and Mass Communications.

“Not only did our students have a chance to participate in this live production experience from our brand new Kennedy Greenhouse Studio, but they also had the opportunity to think critically about important national issues, including the role of the press and the First Amendment," Tanner said.

Throughout the program, Republican strategist Joel Sawyer and Democratic strategist Antjuan Seawright offered comments and insights about the topics. 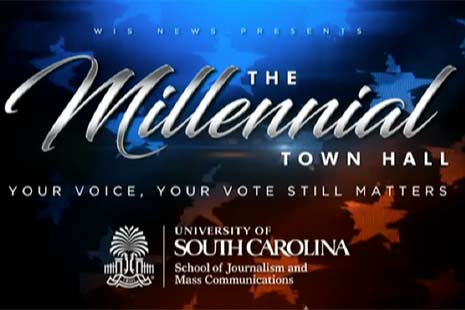