Advertising senior Divneet Lamba isn’t afraid of a challenge. That mindset is one of the reasons she’s been named one of the American Advertising Federation’s 50 Most Promising Multicultural Students.

The AAF’s Most Promising Multicultural Student program is designed to connect the advertising industry with top college seniors while promoting a diverse community in the industry. Lamba applied on a recommendation from instructor Jeff Williams, who leads the SJMC’s advertising sequence.

“It is no surprise to me that Divneet was awarded this opportunity,” Williams says. “Her dedication to the career she has chosen is evident in all of her classwork but also in almost all of her extracurricular activities as well.”

Lamba is the 31st University of South Carolina student to receive the award since the program was created in 1997.

“USC is such a big school, but I feel that amongst the other states it’s always seen as a smaller school,” Lamba says. “The fact that we’ve had so many students going every year is amazing.”

Award-winners will travel to New York City in February for workshops and career fairs. Lamba says she’s most interested in research and account planning and that it’s her dream to move to New York.

“I’ve always been interested in the marketing side of movies and TV shows,” she says. “There are a couple of ad agencies that I’m aware of and Turner Broadcasting Company is also going to be attending which I’m very excited about.”

Lamba has done a lot of work to get to this point. She is in the research department for The Carolina Agency, where she worked in focus groups for the upcoming game for the South Carolina Education Lottery. She’s done SWOT and competitive analyses for local nonprofits. And in her capstone courses, she’s helped a classmate develop a campaign to launch a vitamin product and created Google search ads for a California nonprofit. Outside of class, she devotes her time to school organizations as well.

In addition to all of these, Lamba is a member of the Student Advertising Federation, the Indian Cultural Organization and the university’s Ad Team.

“It’s been one stressful year,” she says.

But she’s confident that all of her hard work will pay off and has prepared her for the upcoming semester on the Ad Team. Students on the team work with a real client to develop a communication plan. The team competes against other schools in the AAF’s National Student Advertising Competition. Although nervous, Lamba will have Ad Team advisors Taylor Wen and Jeff Williams to help her along.

“As an instructor, when you see a student like her in pursuit of their passion your initial thought is to find a way to help them flourish even more,” Williams says. “I am just so thankful that she was awarded an AAF Most Promising Multicultural Student award.” 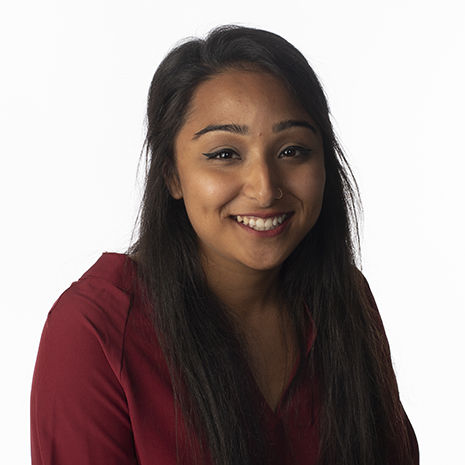 Lamba is the 31st University of South Carolina student to receive the award since the program was created in 1997.

A list of all USC recipients of this award since its inception in 1997.