Eric Robinson isn’t just a lawyer who focuses on media and First Amendment issues. He’s also been a client, working as a newspaper and magazine reporter both before and after attending law school. And after more than 20 years as a media lawyer, he’s passing his knowledge on to students so they can keep themselves and the companies they work for out of trouble.

“Dr. Robinson's teaching style made it very easy for me to retain information long term,” says senior mass communications major Morgan Hill. “He uses the Socratic Method, in a similar fashion to law school, which engages the class and encourages scholarly debate.”

When he’s not teaching, Robinson works with media and law professionals on various media law issues. Working with Dog’s Most Wanted, a show in which Duane “Dog” Chapman travels America in search of those on his fugitives list, is one of Robinson’s favorite activities. He watches a version of each episode before it airs for any potential legal problems and makes recommendations on what producers may want to change to avoid getting into trouble.

“Good media lawyers know that their job is not to say ‘No, we can’t put this on the air’ but how we can do it legally,” he says.

His recent academic research has focused on the standards for online harassment and bullying and the effect of simplifying web sites’ terms of service and privacy policy agreements to make them more understandable to users.

Robinson says the current legal standard for online bullying is whether someone intended to convey a threat or not.

“The legal standard is not very good because it is from an older era and hasn’t adapted to new technology and how invasive it can be,” he says. “If someone’s getting inundated with messages and they perceive a threat, even if the person sending the messages doesn’t intend it to be a threat, I think that should count for something.”

As for simplifying end-user license agreements, he advocates that websites do more than just change the language. One of the solutions he proposes is that when a user takes an action on a site, a pop-up should appear and state the applicable terms of service provision in simplified language to help users who might otherwise not fully understand them and how they apply to their activity online.

In his classes, he keeps students engaged by using audio and visual materials to bring the cases to life and show their real-world applications. "The people in these cases are not just people on a page or in some court decision,” he says. “They are actual people who had an actual problem or an actual issue. I try to bring them out."

But more than that, he strives to provide his students with the mindset needed to excel in their careers. Robinson says a good baseline knowledge for all media professionals is to know the basics of libel, privacy and copyright.

“Dr. Robinson has taught me so much about the law as it relates to communications, but he’s taught me even more about professionalism and critical thinking,” Hill says. “Next year, I will be attending law school and feel so much more prepared after having him as a professor and mentor.”

The ever-changing media landscape is also what keeps the discipline exciting and fresh for Robinson. It can be challenging at times, but knowing how the rules apply can help his students communicate effectively and avoid legal issues.

“Law permeates everything so you’re going to live with it or die with it,” he says. “The important thing teachers or media lawyers do is not to explain the law in simplistic terms but to explain it so that people can understand it — that’s what I’m trying to do here.” 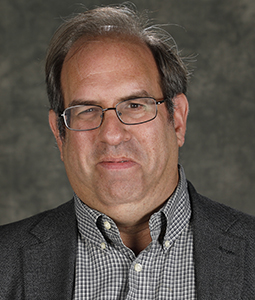