Were you nuts for Planters’ Super Bowl commercial? Students at the University of South Carolina were. They voted the ‘Baby Nut’ commercial the winner of Cocky’s Super Ad Poll.

Now in its 17th year, the Super Ad Poll is part of Professor Bonnie Drewniany’s Super Bowl Commercials class. Students learn how brand identity, likability and persuasiveness can make an advertisement memorable. On the night of the big game, they gather at the School of Journalism and Mass Communications to judge the contenders — and watch a little football, too.

Weeks before the game, Planters made headlines for killing off Mr. Peanut. The winning commercial featured celebrities and other iconic advertising characters at his funeral, where he was reborn as ‘Baby Nut.’

Drewniany, who came back from retirement to teach the course, says the lead-up to the Super Bowl was the key to Planters’ success.

“As an avid collector of advertising mascot memorabilia, I was hoping the news of Mr. Peanut’s untimely death was fake news,” Drewniany says. “My students and I cheered when the Kool-Aid Man’s tear brought him back to life. May he live for another 104 years.”

Freshman journalism major David Newcomb is taking the class because of his interest in becoming a sports commentator. While he liked the Doritos ad the best, he acknowledged that Planters’ commercial generated major buzz.

“I think it’s a good marketing move to fake his death,” Newcomb says. “A lot of people forgot about Mr. Peanut.”

The university didn’t just play a role in judging this year’s ads — it also played a role in creating them. That’s because three alumnae helped create the spots for major brands.

“There are so many different things about our program that prepare them,” Landess says. “Whether it’s the faculty or the resources we have in the J-school, it’s an unbelievable opportunity to come to South Carolina and produce real commercials and practice being a copywriter or an art director or a researcher and then go out and do it. I think our students are so well-prepared that once they get into the industry, they can make a Super Bowl ad just right out of college.”

Public participation was encouraged through an online poll on the event’s website, which allowed voting through 9 a.m. Monday. These results are used to gauge the sentiment of the local community — in previous years, they’ve even been used to break a student tie. This year, Jeep’s Groundhog Day commercial starring Bill Murray earned the highest marks from viewers at home.

The Planters advertising team will be invited to campus later in the semester to receive the coveted Cocky Award and share behind-the-scenes stories about how the commercial was made. 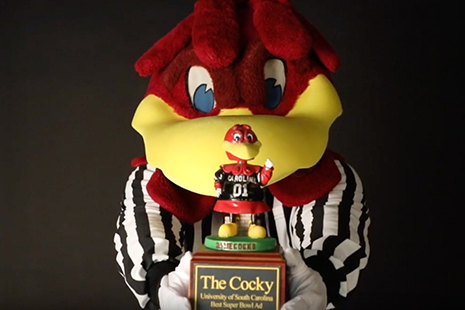 Scenes from the class

As Voted by the Super Bowl Class

Results from the Online Poll