Visual communications sophomore Chloe (Hui) Penaflor will be seeing classes in a totally different light next semester when she exchanges the J-school halls for that of Sogang University in Seoul, South Korea. Penaflor is one of three University of South Carolina students awarded the Freeman-Asia Scholarship to study abroad in East or Southeast Asia.

You will hear more English speakers at the university in Seoul, since it's also the capital city,  but Korean is still the major language you will hear.  How are your language skills and how will you be able to communicate?

Communicating has always been a task I’ve struggled with my whole life. From mixing up my words in Tagalog, moving to America and learning English, and later figuring out how to express myself in a second language, communication has been an aspect of my life I have constantly adjusted.

But now I speak a number of languages, including English, Tagalog, basic Japanese and Korean.  I am very thankful to my Korean 122 professor Jiyeon Song for all of her support and help.

What will your primary area of study be while you are there?
I will take five courses that will focus on my major/minor and any requirements I have left for my Carolina Core. But I also hope to begin my research on mass/visual communications and/or journalism differences between the East and the West. I'm in the process of drafting my research proposal now.

What are you most looking forward to about your time in South Korea?
With the constant adjustments I have had to make to communicate well with others, I realized the importance of communication — and I want to take it on a global scale. I have become comfortable here in the States, but I want to go back to a place where my Asian culture is present. I want to reconnect with that aspect of me and learn to communicate with those who share the same culture.

Why did you choose visual communications as your major?
The art of communication is such an interesting subject for me. There are so many ways we can communicate and express ourselves, and everyone does so differently. I want to explore that subject and see the various ways and scenarios one would express themselves depending on their personality and situation.

My favorite part of my major is seeing how people interpret things since my major requires that we analyze texts and images, and the different perspective and interpretation they provide.

What are your career goals?
My ultimate goal is to tell stories in creative forms, whether through film and media, the arts or journalism. I want to be on a creative path where I can practice self-expression while telling the stories of others. There are many forms of communication, whether that's verbal, visual, etc. I believe this degree will lead me to a path where I can explore the various ways one can communicate and express themselves.

Besides your studies, what else are you involved with at UofSC?
I have been the communications specialist for the Carolina International House at Maxcy College since fall 2020. I am also co-leading the Korean Language Table at CIH this semester.

Also, I am a part of the Carolina Global Scholars program where I have written for their "Beyond Borders" blog.  I've written several film reviews — A Taxi Driver and Amelie.

About the Freeman-ASIA Scholarship Program

Freeman-ASIA is sponsored by the Freeman Foundation, a private foundation whose major objectives include strengthening the bonds of friendship between the United States and countries of East Asia. Through education and educational institutes, the foundation hopes to develop a greater appreciation of Asian cultures, histories and economies in the United States and a better understanding of the American people and of American institutions and purposes by the peoples of East Asia. 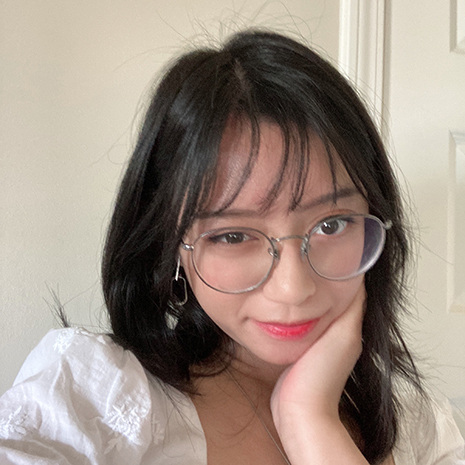 The oldest of four, she likes to draw and read.

Loves plants; therefore, her favorite color is green. Her birth name, last name and nickname all have to do with plants.

She's "notorious" for not showing her face on social media as she's camera shy. (We were happy to get this photo.)