When Ken Baldwin graduated from the University of South Carolina in 1949 with a degree in journalism, he wasn’t sure what he wanted to do. “I was hoping to do something that had some significance — be meaningful and helpful,” Baldwin said. He discovered his interest in covering business after getting a job in Norfolk, Virginia, in 1956.

Baldwin’s career at the Norfolk Ledger-Star included a variety of reporting and editing before he was named business editor, a new field for him. “That’s where I had the opportunity to achieve some goals that I never expected to achieve,” he said.

While working in the field, Baldwin realized the need for business reporters. “I’ve interviewed hundreds, probably thousands of applicants for news reporting jobs over the years, and I can’t really think of any of them who said they wanted to be a business or financial reporter,” Baldwin said. “Even if few prospective reporters wanted to write about those topics, the ability to understand them was still necessary, no matter the beat. It’s hard to think of many endeavors that don’t have a lot of financial or business angles,” he said.

The Norfolk papers he joined soon evolved into Landmark Communications with other dailies, weeklies, radio and TV stations, specialty publications and a top-tier cable system. Its biggest feat, however, was launching the Weather Channel in 1966, a huge hit, which the privately-held company sold for more than $4 billion in 2008.

Landmark grew rapidly and Baldwin soon became an executive shareholder, which is how he acquired his wealth. But the most interesting part of his story is what he chose to do with it after he retired from Landmark in Greensboro, North Carolina, where he worked the final 20 years of his career.

Baldwin said he had always been interested in philanthropy but wasn’t able to do anything about it for a long time. In 2009, he made a gift to the university to help students studying business and financial journalism. Since then, his gifts have totaled more than $3 million to the School of Journalism and Mass Communications to support the Baldwin Initiative. It funds research, symposia, guest lecturers, visiting professors, student assistantships and other related programs.

His initiative includes the Baldwin Business and Financial Chair in Journalism, a position currently held by Michelle LaRoche. “She’s gotten it off to a great start — she and the dean have got some excellent ideas to further enhance the program,” Baldwin said.

Taylor Washington, a senior journalism major,has taken three of the business journalism classes taught by LaRoche and funded by the grant. “Taking classes with her helped me realize that business is everywhere, and it impacts all of our lives — regardless of class, regardless of race,” Washington said. “She just made business news seem accessible to me. It was no longer foreign; it was something that I was able to do too.”

Baldwin’s contributions to the SJMC have made a big impact on South Carolina students, but his generosity hasn’t stopped there. He also supports United Way of the Midlands, an organization that provides resources to the homeless and basic health services to those in need.

“I’m very much in favor of philanthropy,” he said. “I’ve set up some funds that will eventually go to the community foundation in Columbia and the community foundation in Greensboro, where I was for nearly 30 years. All of these will benefit things of local interest like charities, arts activities, organizations like The Salvation Army and others. These things, I think we absolutely have to support, and everybody ought to be encouraged to do that.

Looking ahead, when a COVID-19 vaccine is widely available, Baldwin will be one of the first in line.“I want to be more free the rest of my life. I want to go to the beach and get some sand between my toes,” he said.

The 94-year-old described himself as a “beach bum” and said that going back to the coast is something he’s looking forward to when the pandemic settles down. “My parents lived in Myrtle Beach, and both passed away there,” he said. “I feel a real attachment to the beach. I have not been able to enjoy it in a good while.”

His second wife and college sweetheart, Phyllis, died in January 2020. “We have our aches and pains,” he said, “but we keep moving ahead.”Baldwin is very optimistic about what he and the university will be able to accomplish in business journalism education.

“It’s a challenge and I love it,” he said. “I’m doing everything I can to encourage it and pull for the Gamecocks.” 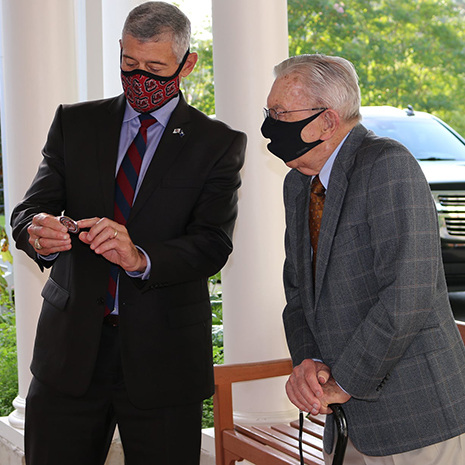