From the city of dreams to the city that never sleeps

SJMC alumnae Jordan Grimmesey and Kathryn Stoudemire brought a piece of the University of South Carolina with them by moving together to New York City.

The two 2019 graduates never saw themselves moving to the Big Apple and didn’t even know each other as students. Each took a chance moving far from home to work in a new city with a stranger, but they quickly became friends and adapted to the fast-paced life New Yorkers live.

“I feel like I have to move a little faster,” Grimmesey says. “I’ve noticed I’ve become a little less patient after living here.”

Since the onset of COVID-19, they’ve both worked in their living room at opposite corners. Grimmesey is an experience designer for Verizon, and Stoudemire is an account executive on the digital health team at Burson Cohn & Wolfe Global.

“Most jobs kind of slowed down, but mine really picked up, especially working also in the health care space,” Stoudemire said.

They would not be where they are today without the J-school. Grimmesey was a visual communications major and credits instructor Jeff Williams — the supervisor of the National Student Advertising Competition Team in the J-school — for much of her success. The Ad Team gave her real-world experience and is the reason she went into the advertising sector. She was also part of Omega Phi Alpha, a service sorority that provided her with leadership opportunities.

Stoudemire completed three out of four years working toward a degree in broadcast journalism before switching her major to mass communications. She had a different college experience than most students since she changed majors with one year left, but the J-school equipped her for her new profession. Stoudemire participated in CreateAthon@UofSC, and she joined The Carolina Agency her senior year which “helped a lot in terms of just basic skills that I didn’t learn elsewhere, because I didn’t even know what being on the account side meant.”

Grimmesey and Stoudemire took advantage of what the J-school had to offer, and their hard work paid off. They have made a home out of New York City and enjoy having a quiet place to retire after a long day in the bustling city. They also enjoy all the food in the city, especially Chinese food and boba.

The two have learned that being a Gamecock lasts longer than the four years of college.

“If anyone from USC reached out to me and was like, ‘I would love to talk about what you do,’ I would always be super open to talking to them,” Grimmesey says. 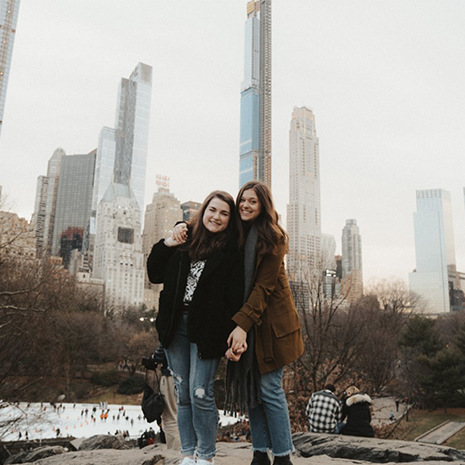 Jordan  Grimmesey and Kathryn Stoudemire hang out in Central Park prior to the start of the Pandemic. 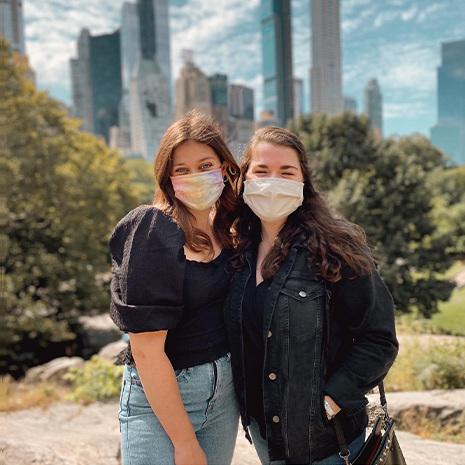 Central Park During the Pandemic

Kathryn Stoudemire and Jordan  Grimmesey hang out in Central Park during the Pandemic.