When she graduated in December 2019, public relations major Claire Robinson jumped into the political big leagues — and The Carolina Agency played a part in helping her get there.

As an undergraduate student, Robinson was heavily involved with TCA — the J-school’s student-run public relations firm. She served as director her senior year, assigning students to various clients and managing the agency-wide leadership initiative.

During this time, she also discovered her love of politics as a State House page. She worked as a communications intern for a gubernatorial candidate and worked with a city council race to get municipal experience.

Fast forward to 2019: Robinson was offered the job of director of campaigns for a startup consultant firm. After graduating, she began to work with 14 clients, guiding them with the perfect strategy for each race.

In 2020, she decided to embark on a new venture and joined the South Carolina Republican Party as communications director. No day is the same when working for a political party.

Depending on the election cycle, Robinson begins her mornings listening to her chairman’s radio interviews followed by reading the news. Emails are checked, news releases are drafted and stories are pitched.

“One of my favorite memories, when I realized ‘wow, I am actually doing this on my own,’ was when some not-so-great news came out about a political candidate, and I had to take initiative to put a story together,” Robinson said.

Taking on such a rigorous job early in her career, Robinson owes a lot of it to the J-school and her time at The Carolina Agency. Part of her job is helping the state executive committee with media training. “Everything I taught them was straight out of my notes from school,” she says.

Two of the biggest things Robinson took from her time at The Carolina Agency are confidence and learning to deal with the press. “Graduating early and getting such an important position so soon after is intimidating,” she says. “But now I know the process and what to do in certain situations, and I wouldn’t if I didn’t attend the J-school.” 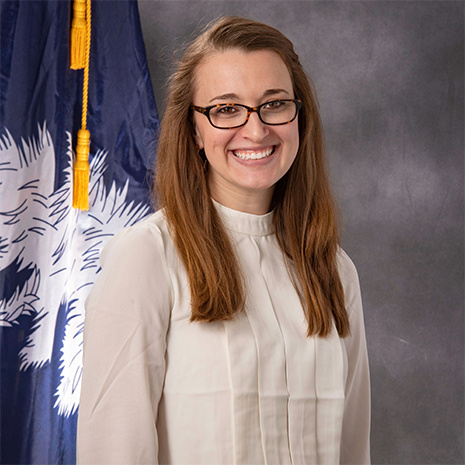 Claire Robinson, '19, was director of The Carolina Agency her senior year. She credits her experience with this student-run agency for her ability to tackle a high pressure job right out of college.