While fans across America cheered on the Rams and Bengals in Sunday night’s Super Bowl, students in instructor Russ Gottwald’s Super Bowl Commercials course debated the advertisements between the action.

The Super Ad Poll returned in person for its 19th year in the School of Journalism and Mass Communications on Sunday. In preparation for the big game, students in Gottwald’s course learned the history of Super Bowl commercials and discussed recent and past trends to understand what works best for the ads.

Students judge the commercials based on three criteria: likability, persuasiveness, and brand identity. According to Gottwald, making a successful Super Bowl commercial really boils down to one thing: being “extra.”

“One of the best ways to be successful is to take anything that you would do in a regular successful ad and dial it up to 11,” Gottwald says.

Along with the decision made by students in the course, alumni and friends were encouraged to participate by voting for their favorites in a separate online poll.

“It's interesting to see the differences in what the older folks pick as opposed to what the students pick,” Gottwald says. “There's some overlap in tastes, but it's not 100 percent.”

Of course, tastes differ among the students themselves as well.

“A lot of people loved the BMW ad with Zeus and Hera, but I thought it wasn’t all that great from a brand perspective,” says senior advertising major Ben Spells. “It’s a unique concept for BMW, but it didn’t exude the premium and luxury experience that BMW is known for.”

After much deliberation, the class finally decided on Planters’ “Feed the Debate” commercial as the best ad. The commercial features actors Ken Jeong and Joel McHale discussing the best way to eat mixed nuts – one at a time or mixed. They pose the question to social media, which leads to national debate and chaos. The commercial ends with the witty yet memorable question: “Who knew America would tear itself apart over a relatively minor difference of opinion?”

VaynerMedia, the agency that developed the ad, will be invited to the university to accept this year’s Cocky Award and discuss their award-winning advertising strategy.

“I told the team from last year that they should really covet this thing,” Gottwald says with a chuckle. “Cannes gives out a ton of Lions each year, but there’s only one Cocky Award.”

Albemarle, North Carolina native Brooke Burris is a senior public relations major. After graduation, she hopes to pursue a career in travel and tourism PR. In her free time, Brooke enjoys hiking, painting and spending time with friends.

As Voted by the Super Ad Poll Class 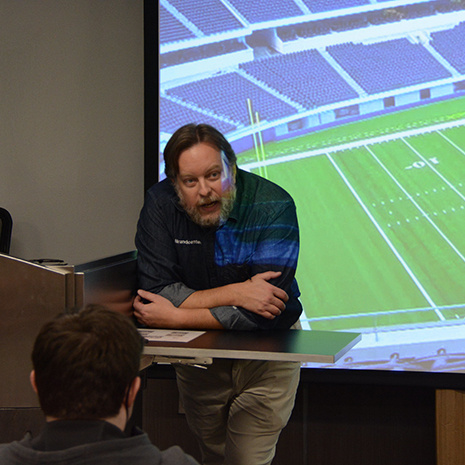