Not your average internship

Listservs can re-direct your life. Just ask Jackie Kilby.  When the USC School of Library and Information Science sent an email to the graduate students about internship opportunities, Kilby chose one from the list and sent her résumé off.  And then she applied for an internship visa because you need one for Turkey!

Once the Turkish Consulate approved the visa, Kilby spent eight weeks working with an archivist at Koç University in Istanbul.

Interning at Koç allowed Kilby to experience a wide variety of things.  “Archiving an archaeology collection is a bit different in that the organization of the materials was by excavation site, by stele or relief, by religious icon, and sometimes unknown items - like pottery.”  She handled photographs, articles, drawing and even hieroglyphic inscriptions that delved into the history of the Hittites, an ancient but rich Turkish culture.

Even though Kilby interned more than six thousand miles away from home, she was still able to find similarities between American and Turkish archiving.  “What was really eye-opening were the similarities with librarianship issues - mainly reaching the patrons.  At the Koç University library, they were in the process of brainstorming how else the library could reach the students,” she said.  “The problems we are studying and learning about are similar to other countries and seem to be the same across the board.“

The internship allowed her to utilize her skills learned at USC and apply them to real-life situations.  Kilby said that her classroom knowledge was “a great preparation for archiving, but there’s something to be said for getting your hands dirty and jumping into a collection.”  Working directly with various artifacts and images increased her comprehension and added “another level of understanding." Kilby said the classes were great preparation for the archiving internship, but "actually performing the archiving is a piece that needs to happen for the full vision to appear.”

But Kilby did more than just work. Her social experiences were as varied as exploring Turkish history — an exhibition on Turkish propaganda from World War I — and a cultural disconnect — “this was a great introduction to the bus and metro system, but was crazy because I was visiting these places on Christmas.”  Kilby said her experience was “definitely memorable and fun.”

Kilby’s now off on a new internship in Washington, D.C., where she is assisting the National Archives and Records Administration on a U.S. Fish and Wildlife collection until April.  Her year since receiving the listserv email has been “a whirlwind, but totally worth it." 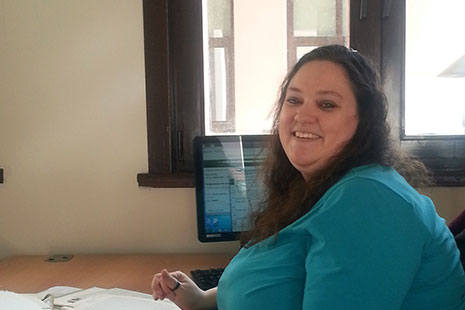 Jackie Kilby is working on her MLIS in the Fast Track Cultural Heritage Institutions program of study.

A sampling of photos Kilby took during her internship.