Cocky’s Reading Express™ will be blowing out 10 candles this year and, with help from BP America, got itself an early anniversary present – a new exterior for its beloved bus.

Kim Jeffcoat, executive director of the South Carolina Center for Children’s Books and Literacy and the director of Cocky’s Reading Express, is very excited about where the program is after 10 years. The program started in 2005 with a “simple yet powerful 'we’re going to go read with kids,'” she said, “and then it really evolved.”

According to Jeffcoat, it’s important this year that the program raises awareness of what it’s done and where it’s been. “We’ve hit all these milestones,” she said. “We’ve been to all 46 counties, we’ve gotten the cool bus, we’ve added family literacy, we’re funded by all these different funders."

Jeffcoat and Christine Shelek, the program coordinator, a.k.a. "Cocky's Mom," expect to hand out their 100,000th book this year.

For the 10th anniversary, BP donated $25,000 to Cocky’s Reading Express, “CRE” to insiders, which the program used to redesign the exterior of their bus. The bus was rewrapped at Columbia Flag and Sign Company at the end of March. The new exterior features images of happy children reading as well as a large Cocky on both sides with a new Twitter hashtag “#10yrsofCockyreads”.

The bus, however, has more meaning to volunteers than just a form of transportation.

“It means a lot to me because it means that organizations and corporations, BP specifically, and people in general believe in what we’re doing and that’s a really powerful thing to know,” said Addison Barrack, a junior elementary education major. “It’s very validating as a volunteer… knowing that someone else believes in what we’re doing enough to invest and give a financial gift… is really incredible.”

I absolutely fell in love with it. Addison Barrack

Briana Quarles, a senior women and gender studies major, said she gets excited driving through a town while knowing that CRE is visible via the bus exterior. She explained that it’s more than just riding through in a white van. She likes that people can see who they are and what they are doing. “They see that we travel and I think that’s really important for getting our message out.”

Quarles said she “fell in love with the program” after her first trip with them, to her hometown of Seneca, South Carolina. “Just seeing the kids get excited about the books they got and seeing Cocky made me stick with it,” she said.

CRE focuses on family literacy as well. In 2010, CRE started an event called “Family Night” which focuses on multigenerational family literacy. Jeffcoat and Shelek work with the adults while CRE volunteers read to the children.

“We’re working with the parents and the caregivers on not only reading habits but on financial habits, healthcare and nutrition,” Jeffcoat explained. “So we have two levels of literacy; we have reading habits and attitudes and we have actual knowledge gain because we’re teaching [the children] about whatever the subject is.”

This isn’t just a program during the school year. During the summer, CRE goes to libraries and more people tend to show up if Cocky comes along. Jeffcoat hopes the kids come because they’re participating in a summer reading program. The goal of the summer program is to avoid summer slide, making sure children don't fall behind during the break and are prepared to return to school reading on their grade level.

The summer programs are also beneficial for incoming college freshman to get a head start on participation. Barrack first heard about CRE when she was participating in the Pillars for Carolina summer program at USC in 2012. "They had a bunch of different stuff that you could try and one of the things I tried was CRE and I absolutely fell in love with it," she said.

In November, CRE will hold a series of events to celebrate the 10th anniversary week.  Watch for the bus, the students and one large bird.

It All Adds Up

90,000Number of books handed out to children in South Carolina. 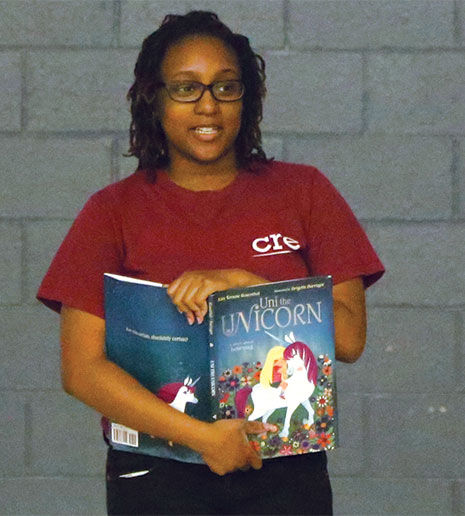