Posted April 13, 2016 by Patty Hall
Photo by Lewis Zeigler: Emily Avery looks for a story in a late 1800s newspaper for a patron of the Carolinianan Library.

"Library science was a left turn in life," said first-year Master of Library and Information Science student Emily Avery. And the rerouting was prompted by the simple, but oft-asked question, "What would you really like to do with the rest of your life?"

At dinner last spring with her mother, Carol Schwartz Avery (USC '81), Emily was discussing her job as a math teacher at South University. With an undergraduate degree in education studies and math ('10) from Cambridge University and two master's from the University of South Carolina in education ('12) and math ('13), Emily's answer should have been predictable. Teach math.

But after two years of teaching, Emily knew that standing in front of a classroom was not the long-term career for her. To her mother's surprise, she responded, "If I could do anything I wanted, I'd work in a library."

Emily said that although her response may have seemed somewhat random, the idea had been simmering for several years, since just before her senior year at Cambridge.

In summer 2009, Emily started the research for her required Cambridge honors thesis. Because her topic was "The Origins of the American High School" and because she was studying in England, she had difficulty getting her hands on the primary documents and research items she needed. So she packed up and headed to Washington, D.C., where she spent two weeks immersed in her topic at the Library of Congress.

There, she fell in love with the unpublished documents and manuscripts which were tangible connections to the past. "It was amazing to hold a letter by the renowned educator Charles Elliot, something that he had written and held in his own hands in the late 1890s," she said. "It felt kind of like striking gold."

But it took six more years, three degrees, and a eureka-dinner-time moment to propel her to pursue library science as a career path.

After resigning from her teaching job, Emily started the coursework towards her MLIS degree at the USC School of Library and Information Science. She now interns part-time at the Caroliniana Library where she once again holds fragile and rare documents.

Mike Berry, the library's curator of published materials and Emily's supervisor, has been impressed with her development. "I have had so much confidence in Emily's judgement with handling material that she has become one of our go-to persons for making scans and photographs," he said. "Her adeptness with working with fragile material is very important for these types of tasks since we often receive requests for reproductions of large and fragile material, including very fragile 19th century newspapers."

Emily's journey has now come full circle; she's headed back to the Library of Congress where she has been selected to participate in their prestigious 10-week Junior Fellows Summer Intern Program. She will be assisting in the Library Services Manuscript Division Reading Room where, among her many duties, she will help students and researchers of all skill levels access and use the manuscripts at the Library of Congress - just as she did years ago.

Emily said her Library of Congress assignment is a perfect match for her. "I will be working with documents that interest me, but I will also get to work with people who are interested in these same documents."

Her coursework and experiences are now a validation of her career change. Emily knows that this is what she really wants to do with the rest of her life. 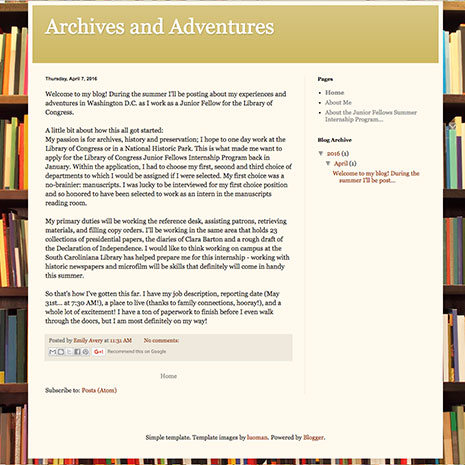 Emily's Library of Congress Internship begins May 31. Keep up with her as she blogs her experience.