Robert V. Williams was born October 10, 1938 in a rural crossroads of north Florida, the youngest of four. He was the first in his family to earn his doctorate, an accomplishment so noteworthy in his small town his photo appeared in the local newspaper when he became a professor at the University of South Carolina. His mother, brothers and sister called him R.V., but he was Bob to the rest of us, beloved by almost three generations of USC students, many of whom are now librarians, archivists and researchers working in schools, universities and businesses around the world.

Bob always made time for his students to drop by his office to hash out issues. He helped create an undergraduate program in information science and continued to teach graduate classes after his retirement in 2004. The Special Libraries Association recognized him in 2003 for mentoring and teaching. He received the prestigious Watson Davis Award in 2011 from the American Society for Information Science and Technology. He funded a student research award at USC’s School of Library and Information Science that continues to honor students who have made exemplary contributions to scholarly research.

Bob published his own research, including books and articles on government information, archives, and business information, with a particular focus on the historical aspects of information science and special libraries. Well after retirement, he continued to conduct oral history interviews with influential South Carolina librarians and pioneers in information science.

Equally important to his professional life was his life at Shandon Presbyterian Church where he was an elder, serving on Session many times, chairing the Outreach Ministry. He helped the church make an impact on social justice. He regularly corralled church members to write letters to congressmen in support of Bread for the World, served as chair of the local CROP WALK to raise money for the hungry, and made sure each year Shandon had as big of a presence at the event as possible. While on Session he never let up trying to raise the amount of the budget that went to outreach. As an adult Sunday school teacher his unique skill was his ability to lead a thoughtful discussion while navigating diverse theological viewpoints. Though a quiet person, he delighted in greeting everyone at Shandon with a genuineness that was endearingly reciprocated.

Whether walking 10 miles to raise money for hunger relief, working outdoors in his large vegetable garden, hunting or fishing, his energy often seemed boundless and his kindness to others was ever present. Those left to honor and remember his love include his wife, Joanne; his daughters and sons-in-law, Allison (Jason Spangler), Kristina Mueller (Chris); grandchildren Sophia, Carson and Patrick; brothers, Herman and Leslie; sister, Doris (Martin); and many nieces and nephews.

Dr. Bob created the archival studies program, was an architect of the library school/history joint degree, and designed the undergraduate program in information science for the School of Library and Information Science and was most proud when our first students matriculated. He supported the program with funds for research awards and scholarships. He was always available for students and faculty. He received the prestigious Watson Davis award from the Association of Information Science and Technology and was the primary supporter for the History of Information Science project. His students adored him. His friends and colleagues called him true blue and all of us will miss this one of a kind “Gentleman Scholar.” -Dr. Sam Hastings (former SLIS director) and Dr. R. David Lankes, current SLIS director

Bob was a gentle and gracious man, a teacher and scholar. On the racquetball court he revealed his sly side.  I greatly value his dedication to SLIS and its students and alumni. -Charles Bierbauer, dean, College of Information and Communications

Dr. Bob was a true gentleman scholar.  He always expected top quality research and worked tirelessly to educate most of the archivists and joint history/archives degreed professionals in the southeast.  He will be missed by so many and we trust you will hold him in your hearts. -Dr. S.K. Hastings, former SLIS director

He was indeed the dearest of colleagues, a fine researcher, talented teacher, and the best of mentors. He will be missed. The bell tolls for us. -Dr. Jennifer Arns, associate professor, USC School of Library and Information Science

Bob is fondly remembered as a vital member of our SLIS poker group from decades ago, where you could buy the pot for a quarter - "nothing wild but the players"... -Dr. Bill Hogue, vice president for information technology and chief information officer, USC

It was a privilege to have worked with Bob.  He contributed much to the life of the college and subsequently the school.  He will be remembered for his outstanding teaching, his meticulous research, and his collegiality.  We have lost a caring and compassionate colleague. - Dr. Fred Roper, distinguished professor emeritus, USC School of Library and Information Science

Bob Williams did a lot for the school and field.  The one thing that sticks out most, in my mind, is how he transformed doctoral students.  Bob taught the class that everyone had heard about — good and bad.  The class was like an urban legend.  It was amazing to see how the students transformed during his class.  By the end of the semester they were not only more confident, but they had a strong appreciation for the field and individuals who contributed to it.  That kind of change does not come from a textbook but from an educator who is truly passionate about the field and compassionate in his classroom.  I will miss seeing him in Davis. -Dr. Elise Lewis, assistant professor, USC School of Library and Information Science

Dr. Bob could bake; he made awesome homemade bread. He brought warm homemade bread with butter to SLIS functions ... always something to look forward to at Christmas party every year. I'll miss Dr. Bob as a colleague, of course, and I will miss his homemade bread too. Dr. Bob was an authentic scholar who had many talents. -Dr. Feili Tu-Keefner, associate professor, USC School of Library and Information Science.

I was Bob's "double" GA — his regular GA and his GIS project GA. He was my mentor and friend. God Bless you, Bob. You were a wonderful teacher and guide. -Lorraine Netretic Abraham

It is with great sorrow that I read this news bout Bob's passing. Although I knew him only briefly, I could feel the nobility and gentlemanly demeanour as well as his innate kindness. There are indeed very few left of his kind. -Fidelia Ibekwe-Sanjuan, professor, Aix-Marseille University, France

A sad loss for Bob's family, friends and SLIS.   I met him as the advisor for my specialist degree decades ago and we became long time friends.  He taught me statistics and we shared teaching a records class.   I respected Bob enough to hire him as a consultant for a library project.  A role model for all of us, he impressed with his knowledge, quiet confidence and openness.  Godspeed to my friend. -Jack Bryan, director of administration (retired), SC Attorney General's Office

I think that an important thing for his former students and colleagues to know about him was how much his character and the resulting genuine commitment he had to his students and colleagues, the Library School, and the community of Columbia, was formed by his deep and active faith. He believed that all people were created in God's image, and that he was called to work in the world to make the lives of the poor, the puzzled, the outcast, the dependent, better by his actions. He was a wonderful colleague in the joint MA/MLIS program which we co-directed for public history and library science for more than 20 years; he expanded my world of archival educators by helping to create the Southeast Archives Education Colaborative (which still exists, although USC pulled out of it a dozen years ago). I will miss his quiet calm analysis of what needed to be done - and then his efforts to make sure that the process of doing it was put into place. -Dr. Constance B. Schulz, distinguished professor emerita, USC Department of History 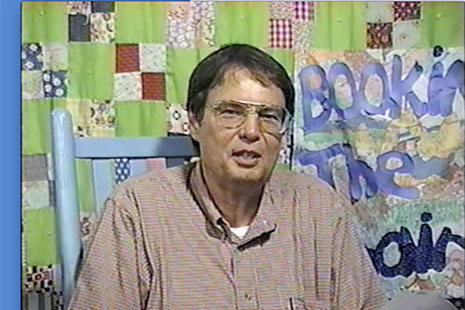 Dr. Bob was a guest speaker in Dr. Pat Feehan's Libraries, Literacy and Literature class in the late '90s. He talks about his life as the son of a sharecropper and his relationship to books.