Kim Jeffcoat is a woman of many acronyms: SCCCBL, CRE, SLIS, and CIC. But all these letters simply spell out what she’s been promoting for at least the past seven years: literacy.

As executive director of the South Carolina Center for Children’s Books and Literacy (SCCCBL) — an outreach of the School of Library and Information Science (SLIS) — Jeffcoat has overseen a statewide initiative to improve literacy through books, training, research and hands-on opportunities. Her collaborators include public and school librarians, student volunteers and a large bird named Cocky.

Charles Bierbauer, former dean of the College of Information and Communications, says Jeffcoat’s contributions toward eradicating illiteracy in the state are “myriad.”

“We’re better at what we’ve long been doing thanks to Kim and all her associates,” he says.

Jeffcoat is moving to the College of Arts and Sciences on Sept. 8 to become director of development for USC’s largest college. But she can’t pack her legacy in a box and move it to her new office. The fruits of her efforts will continue to nurture South Carolina’s literacy efforts.

With the staff addition of Christine Shelek, aka Cocky’s mom, CRE was able to travel more often and over farther distances. CRE volunteers have now been to every county in the state, visited 550 schools and distributed more than 116,000 free books to children.

In summer 2013, the first CRE Summer Bus Tour was launched. Jeffcoat describes it as an effort to “slow the summer slide of reading” and to encourage students, and their parents, to read all year long.

The literacy initiative expanded beyond children’s literacy to literacies important to the growth of families.

“Our research and increased efforts showed us that a family literacy component was key to having the greatest impact,” Jeffcoat says. “With startup funds from the Barbara Bush Literacy Foundation, we were able to develop events for the families of the students to teach them how to have literacy-rich homes, including financial, health care and environmental literacy.”

“Cocky’s Reading Express is the fun, exciting, public face of what we do, but behind it we have the research-based literacy programming,” Jeffcoat says.

Moved to a new facility

In 2012, Jeffcoat directed SCCCBL’s move from the South Carolina State Library to its current 2,676-square-foot location at 1430 Senate Street. The Center is designated by the Library of Congress as the official examination and preview center for the state and receives books before they are released to the public. The new location makes the staff and the books more accessible to the general public.

“We are now a destination,” Jeffcoat says. “The new location gives us more visibility and the ability to host literacy events and teach classes here.”

In addition, Jeffcoat says patrons can now search the Center’s new online database to see what books are available.

SCCCBL launched the Young Palmetto Books series in 2012 with the USC Press, one of the first children’s book publishing arms of its kind by a university press in the country. Jeffcoat serves as the series editor which publishes books written by South Carolinians or about places within the state, specifically targeting audiences from birth through age 18.

“We are actually filling a void,” Jeffcoat says. “We are publishing the books that we can’t find, but which are needed. And because we have CRE and this research center, we can get these books into the hands of people.”

Since its launch, Young Palmetto Books has published 13 books, with nine more in various stages of production. Jeffcoat says she’s happy to know that long after she is gone, “These nine books will still be forthcoming.”

Embedding into the community

Jeffcoat says one of the accomplishments she’s most proud of is SCCCBL’s recent partnership with USC’s College of Education on the Community Based Literacy Initiative.

With a $100,000 Hearst Foundation grant, one of the largest ever awarded in support of SCCCBL, the Center will implement programs in communities which will arm them with the tools to tackle illiteracy.

She says the new initiative “is essentially taking what we know works with Cocky’s Reading Express and embedding it into the community.”

Leadership will change; but the mission is ongoing

Jeffcoat is quick to say that any success she’s credited with has been the result of “a truly collaborative effort” with the college, the school and the various groups and partners through the years.

“We’ve helped people in our state understand that USC cares about them, wants them to have a good quality of life and that increased literacy will help them achieve that,” Jeffcoat says.  She expects the work to continue under Shelek, CRE program coordinator, who will take on the daily management of the Center.

“Christine has tirelessly led CRE for the last six years.  She is on the bus with USC students, communicating with teachers and librarians and encouraging kids in schools across South Carolina to read more,” Jeffcoat says.  “Without her efforts, I wouldn’t have been able to lead the Center in the way that I have.”

And although she’s shedding some of her old acronyms, Jeffcoat says she’s not giving up USC or her affiliation with SLIS or CIC.

“I got my MLIS from SLIS back in the ‘90s,” Jeffcoat says. “I love the team, the school and everyone I got to work with. Just because I’m moving across campus, those relationships won’t end.”

SCCCBL - It All Adds Up

100,000Dollars awarded by the Hearst Foundation Photos of Kim Jeffcoat and the SCCCBL crew through the years.

Christine Shelek
Will continue as CRE Program Coordinator while managing the day-to-day operations of SCCCBL. 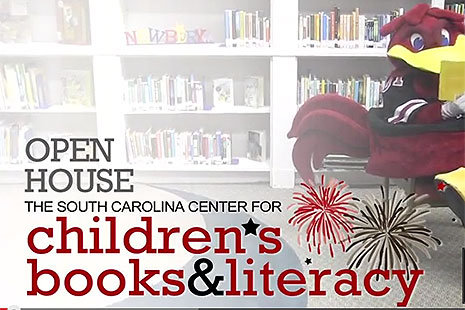 In 2012, Jeffcoat directed SCCCBL's move into a new building. Check out some of the grand opening.