What exactly does the information science major prepare students to do? If you ask Dr. Elise Lewis, she’ll tell you there’s no simple answer; graduates do everything from managing projects to data analytics. But, at the root of the major is the idea that people become empowered when they have an understanding of information. That’s what drove Lewis to become a professor in the field, and it’s what’s pushing her to recruit the next generation of information scientists.

Lewis stumbled into information science while studying radio, television and film production as an undergraduate at the University of North Texas. As a student worker in the library’s technology department, she became the person others turned to when they needed tech help.

“I had no idea what I was doing, and my classmates were intimidated as well, so we would kind of figure it out together,” she says. “I figured out I was really good at technology and teaching people how to use it.”

A fellowship working on an African American photo archive helped pay for her Master of Library and Information Science. From there, continuing on to get a doctoral degree in information science just made sense.

“I like the idea of how people can become empowered when they have an understanding of information,” says Lewis. “I’ve always had a love for museums and how we preserve our culture and it kind of fit hand-in-hand.”

In 2009, she accepted a faculty position at the School of Library and Information Science teaching graduate students about cultural heritage institutions, museums, archives and libraries. But after taking on a section of the information literacy and technology class five years ago, Lewis realized teaching the school’s undergraduates was her true calling.

The Bachelor of Science in Information Science is a small — but growing — undergraduate program, and for the past few years, SLIS has made efforts to expand it in response to the increased demand for a data-savvy workforce. In the summer of 2016, Lewis was tapped to serve as the program’s faculty coordinator. The position means that in addition to teaching, she is responsible for recruiting, resolving student issues, planning curriculum and creating a sense of community among students. She also chairs the undergraduate committee, which includes coordinating Welcome Week activities. Her influence within the program has made her a favorite among students.

“During my first semester of freshman year I wanted to change my major and Dr. Lewis spoke to me about information science and everything it entailed,” says sophomore Alyssa Bunting. “After talking to her, she made me feel like I was at home with my new major. Dr. Lewis inspires me and motivates me to solve problems and help better this place that we all call home.”

So what do information science majors learn? Lewis describes the degree as emphasizing four main skills: leadership and the ability to manage, analyze and implement information within an organization. When Dr. David Lankes joined SLIS as director in 2016, he coined the BSIS program’s unofficial slogan: “In Search of Geeks with Social Skills.” It’s a saying that sometimes elicits laughter, but as Lewis explains, it’s also accurate.

“There is a technology aspect to it and a people aspect,” she says. “If you have a problem with a system on campus, most people will still ask a person for help as opposed to looking online. So, people with knowledge and information are very powerful.”

Being a go-between for people and information lends itself to a variety of careers.

“Every field calls them something different, whether they are a data analyst or an information architect or a records manager,” says Lewis.

How is it different from other majors? While careers like these exist on the same continuum as computer programming or information technology, it’s the social science aspect of information science that prepares students for leadership positions within organizations. Rather than writing code, BSIS graduates manage teams of programmers. Instead of simply building webpages, they study information architecture best practices to design user-friendly interfaces. And, after using technology to gather valuable data, they go the extra step and explain to others within their organization how that data might be utilized.

Lewis’ teaching style – and research – center around integrative learning. It’s an approach that prepares students to think outside of the box, something they’ll need when entering the world of information science.

“Getting them out of the classroom and giving them a real-world experience makes a much richer class and a much more engaged class,” says Lewis. “No one wants to sit there and be lectured forever.” 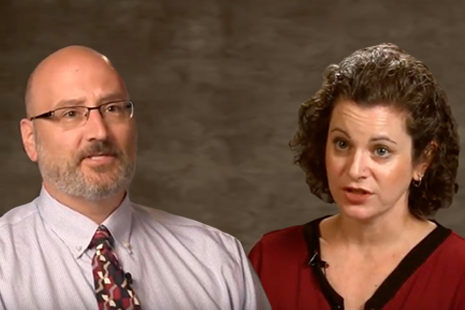 David Lankes and Elise Lewis on information science: what it is and how we help students succeed.