How do laws influence access to information? Do they enhance knowledge creation or limit it? Can legal interpretation create information barriers for specific groups or populations? These are questions that Dr. Dick Kawooya, an assistant professor in the School of Library and Information Science, explores in his research.

Originally from Uganda, Kawooya came to the U.S. in 2001 as a graduate student. His mentor, Professor Wallace Koehler, was tasked with starting a brand-new Master of Library and Information Science program at Valdosta State University in Georgia, and he invited his mentee to join the program’s inaugural class. Kawooya was drawn to the field because he recognized that librarians played an important role in helping people meet their needs.

“It was the idea that librarians are at the forefront in providing access to information and preserving information and culture,” Kawooya said. “They make sure whatever anyone has created is available to future generations.”

Initially, he didn’t plan on becoming a professor and staying in the U.S., but through Koehler’s influence, Kawooya says the idea took hold. After completing his master’s degree, his mentor helped him land a spot in the Ph.D. program at the University of Tennessee. It was there that he discovered his love of teaching — and the difference it allowed him to make.

“Just being in the classroom with students, I realized the influence you have as a teacher,” Kawooya said. “I have a lot of graduate students who come in with questions of trying to figure out their lives and where their implications are going to take them. I realized this is a very important position to be in and you can actually have an impact on people’s lives.”

Kawooya’s area of research lies in information policy, law and ethics. He is most interested in how to minimize the legal and policy barriers to information access, particularly focusing on the laws regulating intellectual property in Africa and developing countries. International property rights have fostered innovations in the creation, storage and communications of information, but they have also created barriers to information access. This can constrain the services that libraries and other cultural institutions provide. Areas with fewer resources, in particular, are affected by laws that regulate information accessibility, highlighting the importance of research like his when it comes to influencing policy changes.

“When you think about access to information in these parts of the world, it’s fair to say that there are people who struggle to get the means to access information,” he said. “For instance, a well-developed public library system is not true everywhere in Africa.”

Digging deeper into his research area, Kawooya is currently exploring the legal barriers for individuals with visual impairments. In 2008, he was selected as a member of the African Union Expert Group that formulated one of the proposals that formed the basis for the “Marrakesh Treaty to Facilitate Access to Published Works for Persons Who are Blind, Visually Impaired or Otherwise Print Disabled.” This treaty is designed to reduce or eliminate the “book famine” among the visually impaired, something that he sees as a human rights and social justice issue.

In order to change this, he is currently working with the World Blind Union and the International Federation of Library Associations and Institutions on a multiyear research and advocacy project on the implementation of the Marrakesh Treaty in developing countries where those with visual impairment and print disabilities remain critically undeserved.

Though Kawooya is making a difference by sharing his research globally, he finds that his heart is in the work he does in the classroom.

“The most exciting part of my job is students who are willing to learn,” Kawooya says. “The conversations are only supposed to last minutes, but they end up lasting hours.”

Blaire Taylor is a first-year graduate communications student with an assistantship in the web communications office of the college. She is working towards a career in visual communications and public relations. Outside of school, she loves to travel and explore. 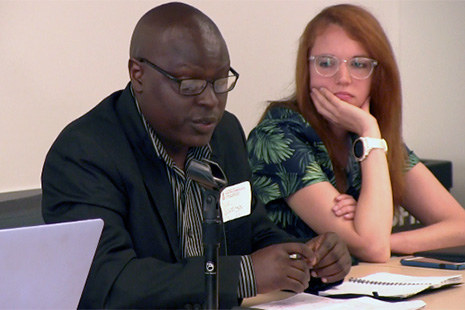