Distance Education: We will come to you

With the click of a button, class registration is complete.  It's that simple to register for School of Library and Information Science distance education courses. A laptop can be taken anywhere that Wi-Fi is available, lectures can be viewed or listened to via Blackboard and assignments can be turned in on the same platform. It is easier than ever to earn a degree through a combination of in-person and online classes or completely online, especially in the Master of Library and Information Science program. But it wasn’t always so accessible. Daniel Barron, a distinguished professor emeritus and former SLIS director, along with a team of dedicated faculty and administrators, made it happen.

“In 1976 at my first faculty meeting, I broke the tie as to whether the college should take selected required courses off campus to Greenville and Charleston,” Barron says. “A ‘no’ vote would have meant that only those students who could come to the Columbia campus would be able to pursue a professional degree.” That vote established the program as a pioneer in distance education. So how did it work before the internet era?

In its early years, faculty traveled to different campuses once a week to teach the material. Eventually, lectures could be viewed through satellite or VHS tapes. They were recorded live and could be watched at a specific time and place away from the physical school, streamed by satellite halfway across the country.

“I remember watching a Saturday class and being intrigued that students were watching the same class in Maine,” Mary Gwyn, ’97, says. “I had classmates in a different state going through the same coursework.” But satellite wasn’t the only method of distance education. VHS tapes were a product of the recordings and could be given to students to sort through on their own time.  "I would get the boxes with the VHS tapes and find it hard to believe that I could get credit for classes when I wasn't actually in class," Gwyn says.

Today, tests can be completed and turned in online. In the 1990s, however, exams were often proctored. “For my midterm, the professor emailed the exam to the feature animation librarian,” Lorene Kennard, ’99, says. “She proctored the exam in a conference room near the Disney MGM Studios and mailed it back to campus because they wanted the original.”

The innovative spirit that drove the school’s distance education efforts helped establish its MLIS program
as one of the best in the country — it’s ranked No. 18 overall and No. 5 in the school library media specialty by U.S. News & World Report.

“We hold the distinction of being the first to have taken distributed learning from the windshield to the TV screen to the computer screen and beyond,” Barron says. “We have used every medium as it became available to us to educate library and information professionals as soon as those media and communications systems were available to the students.”

The belief that all students should have the opportunity to pursue their dreams has also been a driving factor behind the program’s continued emphasis on convenience. Long after casting his historic vote, Barron came across a 1920s-era quote from Havilah Babcock, an English professor who once called Davis College home, too. Decades had passed, but the sentiment of it resonated with Barron. “‘If you can’t come to the University of South Carolina, the University of South Carolina will come to you,’” he says. “I believed that then and continue to believe it today.” 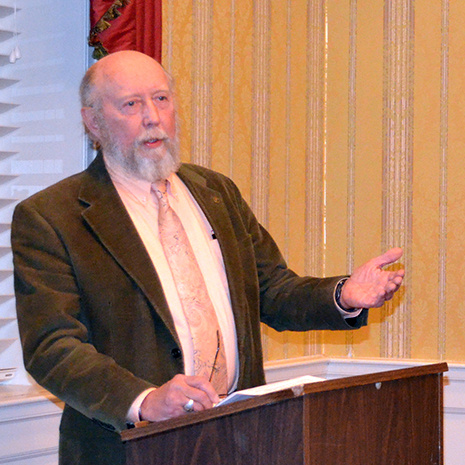