Accounting alumna running across the country in 4K for cancer

Bailey Wilhelm has been running since the beginning of high school. After eight years of doing regular runs, she was ready for a challenge and was looking for a way to make a positive impact before starting work in the fall. That’s when she remembered hearing about 4K For Cancer.

“I was looking for something to do when I remembered this run,” said Wilhelm, a 2016 accounting graduate. “I just typed ‘young adult run across the country’ into Google, and it popped right up!”

The annual 4K For Cancer supports the Ulman Cancer Fund for Young Adults, a nonprofit organization that provides support to cancer patients in the transitional time between childhood and adulthood. The “4K” stands for the 4,000-mile trip the six teams will take to get from one side of the country to the other.

“There are a lot of organizations that help kids with cancer and there are a lot that help older people, but there aren’t many that work with people in that in-between stage of life,” she said.

Besides wanting to make a positive impact, Wilhelm was motivated to join the run’s 15th year for her grandmother.
“My grandmother has been diagnosed with two types of cancer, so I wanted to do this run for her,” she said.

Each participant had to raise a minimum of $4,500, which goes almost entirely to young adult cancer support centers and college scholarships for those who have been diagnosed with cancer. Wilhelm has been fundraising since September and training since February.

“It’s a challenge, and I enjoy challenges,” she said of her motivation to do this run. “Running is a way for me to be brave, so why not take that and turn it into something that actually impacts others in a positive way.”

Wilhelm and her team started their cross-country run for the 15th annual 4K For Cancer in San Francisco on June 19. The run will end on Aug. 6 in Wilhelm’s hometown of Baltimore, where her family will be waiting to congratulate her. After the run has finished, Wilhelm will have a few weeks of rest before starting her new job at PricewaterhouseCoopers in Charlotte in September. 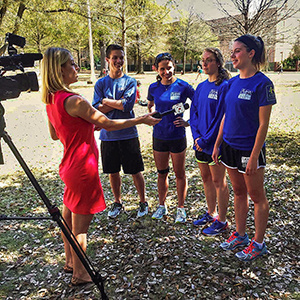 Wilhelm (right) is interviewed with her 4K For Cancer teammates.