Cultural diversity is something Alice Leri has been exposed to her whole life, having been born in Italy to a traditional Italian family and traveling from Italy to wherever her interests have taken her. From a young age, she has been drawn to Islamic culture, and that interest took Leri across Europe, ultimately leading her to the Darla Moore School of Business.

Leri was chosen to be the first associate dean of diversity and inclusion at the Moore School. In this role, she works closely with Dean Peter Brews and the newly formed Dean’s Diversity and Inclusivity Council to ensure that acceptance and understanding is widespread in the business school and foster a greater sense of community among its students.

Since coming to the business school three years ago to teach international business, the clinical assistant professor has become a faculty associate in the Islamic World Studies program for USC’s Walker Institute, the primary university organization for student and faculty international research, scholarships and public service. Leri pursued degrees in Islamic studies in undergraduate and graduate school and studied abroad in Turkey for about a year during her undergraduate studies.

“It’s empowering for people that age to live abroad because, for the first time, you learn that you can make it on your own,” she said. “It teaches you to value the people you meet because they become your community.”

Over her lifetime, Leri has worked with many different types of people in various contexts. She has realized that differences should not be overlooked or fought against, but understood and embraced.

“The important thing is to say, 'I see the difference between me and you, and I see that the playing field is uneven,’” she said. “Let’s try to make it better for everyone because we can all benefit from the playing field being leveled.”

After getting her master’s, Leri moved to Germany to get her doctorate. Throughout her travels, she learned to speak English, French, German, Arabic and Turkish in addition to her native Italian.

She specializes in Turkey and Turkish immigration, despite having no personal connection to the country or its people. “You don’t need to have a specific personal interest that is related to your story to be interested in something,” she said.

By the time Leri moved to the United States, she had already been living away from home for six or seven years, so the biggest challenge she faced was not so much culture shock as it was distance shock — a problem many Moore School students likely face.

“The difficult part of coming to the United States was really the idea of living across the ocean,” she said. “I was used to being able to drive back to Italy.”

Leri hopes to teach all business school students about a concept called “super diversity,” the idea that every person has multiple identities, or individual aspects of themselves that make up who they are. Discrimination, according to this concept, is essentially one group, typically of privilege, not allowing another group to have more than one identity. When it comes down to it, allowing each other to have and live out these differences is what will build the best sense of community, she said.

“Do not allow only the ones similar to us to have multiple identities, but also the ones who are radically different from us,” she said. “Let’s try to see them in a more complex way because they are not one thing; they are many. It should not be a privilege to have more than one identity. It should just be a fact." 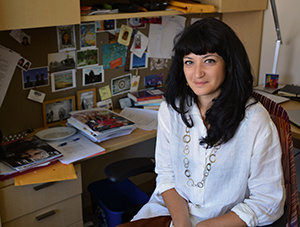