Ibrahim Famouke Doumbia is not your typical college freshman — towering over most people at 6'6", the Moore School student plans to study international business while at USC as well as play forward for South Carolina's men's basketball team.

The Mali, West Africa, native was drawn to international business from the beginning because of his love for travel and his ability to speak four languages — English, French, Bambara and Malinké. Besides improving in basketball over the course of his four years, Doumbia hopes to learn more about how to bring specific businesses from one country to another so he can make products such as phones and cars more accessible to people back home.

"Here, there are car dealerships and phone contracts so you don't have to pay the full prices up front, but in my country, we don't have that," he says. "A lot of people can't afford those things, but if they could pay a little at a time, more people would be able to buy those types of things."

The oldest of 14, Doumbia started playing basketball in the eighth grade because of his height.

"I was playing soccer, but someone told me I needed to play basketball because I was one of the tallest people around," he says. "I started playing street basketball, and after about two months, I was recruited by the national team."

Doumbia says he didn't realize he could play at that level, but he went on to represent Mali's national team at the FIBA Africa U-18 Championships.

"At first, when I was playing street basketball, it was just fun," he says. "I was just this tall, skinny kid playing basketball."

Now that he's a Gamecock, he says what he enjoys the most — besides the game itself — are the people around him.

"We have a good coach who's always teaching us about life as well as basketball," Doumbia says.

After graduating, he wants to work with an established company for a few years before starting his own business focused on bringing certain parts of industry back to Mali.

Other Moore School students who play alongside Doumbia on the men's basketball team include freshman forward Jason Cudd and sophomore guard Christian Schmitt. Both are majoring in business. 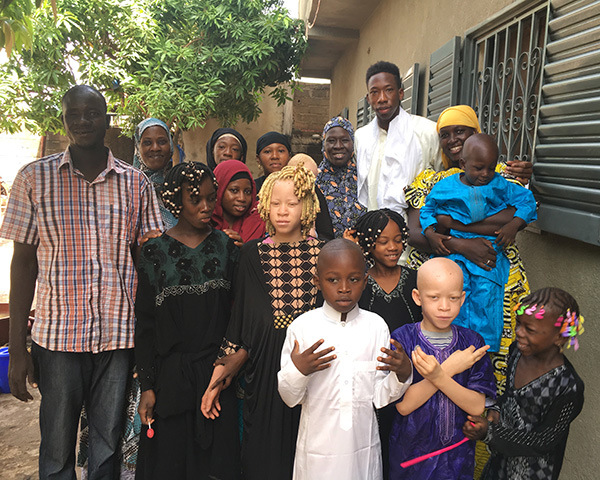 Ibrahim Famouke Doumbia (top right) joined the men's basketball team this year as well as joining the Moore School with the intent to study international business. He hails from Bamako, Mali, and is the oldest (and tallest) of 14 children.