At first glance, Linyun Yang’s recent research projects seem completely unrelated. One project evaluates consumer expectations of a company according to its size, and the other studies how the degree of effort women put into their daily beauty routines affect the way others judge their moral character.

Despite obvious differences, the two studies share many common underlying themes. Both attempt to understand how consumers make inferences based on superficial traits – concepts that are directly applicable to Yang's position as an assistant professor of marketing at the Darla Moore School of Business.

Her paper, “Beauty, Effort, and Misrepresentation: How Beauty Work Affects Judgments of Moral Character and Consumer Preferences,” finds that people believe women who put significant effort into enhancing their physical appearance are less moral than women who put in lower effort. For instance, when a woman is described as spending an hour and 45 minutes versus 10 minutes on her daily grooming routine, people rate her as more likely to engage in immoral behaviors (e.g., lie on her resume).

Importantly, the study finds that high-effort beauty work negatively impacts perceptions of a woman’s moral character only when it dramatically changes in her physical appearance and these changes last for a limited amount of time. In one experiment, a woman putting higher effort into hair and makeup was judged as less moral. However, putting higher effort into in skincare (which leads to less dramatic but longer lasting changes) was not judged more negatively.

The way people judge and evaluate each other based on superficial traits also translates to the corporate landscape. Through their research, Yang and her coauthor found that consumers often make deep assumptions about a company based on its size.

Yang joined the Moore School faculty this year, after spending eight years as an assistant professor of marketing at the University of North Carolina at Charlotte. She hails from a family of academics — her mother holds a degree in statistics, her father is a biochemistry professor and her sister is pursuing a doctorate in ecology. Yang received a degree in biopsychology and cognitive sciences from the University of Michigan and holds a doctorate in marketing from Duke University. She uses her research in the consumer behavior class she teaches at the school, using real-world examples to demonstrate certain concepts or behaviors.

In addition to teaching at the Moore School, Yang is currently developing a new marketing research project that aims to determine how important aesthetics are based on whether a brand is anthropomorphized as a man or a woman.

To test her hypothesis, Yang recently conducted an experiment that introduced participants to home goods brands called “James” or “Andrea” and asked them to imagine the brand as a person. Participants were then asked to write down what they thought each brand’s personality, values, and hobbies were. They were also shown images of each brand’s products.

“We found that for Andrea, consumers liked her better if she had more aesthetically pleasing products,” Yang said of the preliminary results. “However, for James, the physical appearance of his products didn't matter; consumers liked James equally. These results suggest that when asked to think of brands as people, consumers also judge these brands relative to societal gender norms, weighing physical looks more heavily for women than men.”

Based on these superficial features or characteristics, Yang is interested in determining how and why consumers make much deeper level judgments.

You can learn more about Yang’s research here: 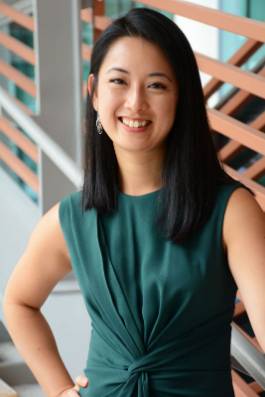