The National Academy of Human Resources (NAHR) inducted the Darla Moore School of Business’ Riegel & Emory Human Resources Research Center as the 2018 NAHR Fellow, making it the third educational institution and 13th organization to be inducted since the NAHR’s founding in 1992. This highest honor was bestowed on the center at the annual NAHR banquet in New York City on Nov. 8.

“The NAHR is essentially the hall of fame for the human resources field,” said Anthony Nyberg, a professor in the Department of Management and the academic director of the Master of Human Resources (MHR). “Being inducted into the NAHR is the equivalent of a lifetime achievement award for HR practitioners.”

The vast majority of the NAHR’s members are top professionals in the HR field, and a handful are academicians and organizations. Pat Wright, the Thomas C. Vandiver Chair in the Department of Management and director of the Center for Executive Succession (CES), is one such academician.

“To be inducted into the NAHR is a mark of prestige that the Riegel & Emory Center has more than earned,” Wright said. “From the caliber of students it supports in various avenues of human resources programming to the frequency of highly influential HR executives it brings in to partner with the school, the center is making quite an impact on the field of human resources today.” Wright is regarded as one of the top 20 HR thought leaders in the world and has been involved in five of the other 12 organizations that are fellows of the NAHR.

The Riegel & Emory Human Resources Research Center, founded in 1982 as the Riegel & Emory Advisory Council, provides funding for HR research, helps steer MHR curriculum and provides real-life learning experiences and networking opportunities for students through the more than 40 center business partners. Nyberg believes the increased visibility of the high-caliber MHR program and the number of C-suite executives brought in by the CES has caused these and other endeavors of the center to come into the limelight, making it a prime candidate for the honor this year.

“This is a wonderful validation of the tremendous work people have been doing in and through the center for the last 36 years, and it’s an excellent marker to set the tone for the next 36 years,” Nyberg said.

The NAHR is an organization in which individuals and institutions of distinction in human resources are recognized for their professional achievement and where, through a collaborative effort, the work of the profession is advanced. Through election as a fellow of the NAHR, those individuals and institutions are recognized by their peers for their sustained achievements in and their contributions to their organizations, the human resources profession and society at large. 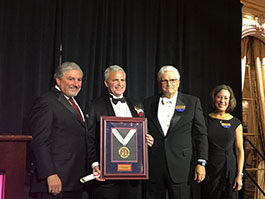 The National Academy of Human Resources