The team, Brendon Beach, Katie Bergey, Katie Field, Karen Gates, Jack Graham and Aaron Gulibon, began practicing for the competition in October and won their November regional round in Atlanta to advance to the final national round.

Each of the original 54 teams was offered a challenge statement for November’s regionals to find an assurance service for non-financial data. Essentially, they had to assure numbers of a topic they chose by checking for measures of validity.

“We focused on active user validation,” said Graham, a junior Moore School accounting major and economics minor. “We were providing assurance that the amount of users a company reports is the correct amount.”

Active user validation is used in audits for companies to assure their advertisers and management that the numbers they are reporting are accurate, said Field, a junior accounting major.

Graham said their audit can uncover bots or automated users and inactive accounts that cannot be counted as part of the active user number.

Graham noted that Wells Fargo, Facebook and Twitter previously had a large number of bot accounts and misrepresented their active user numbers to advertisers.

“All three lost eight to ten percent of their stock value,” Gulibon said.

The companies are also facing litigation for their misrepresented numbers of active users, Beach added.

Understanding the importance of active user validation, the team was able to create a comprehensive process to audit a company’s active users.

The competition emphasized “making sure the idea [the team created] was feasible in an audit environment and building a presentation breaking it down from start to finish what it would look like,” said Gates, a junior accounting and operations and supply chain major. “We were implementing the software, doing the data analytics, seeing the services offered from it, doing the audit and advisory services and creating an appendix.”

The team worked diligently for six months, meeting multiple times a week to work on their audit and subsequent presentation.

“The team demonstrated tremendous chemistry and commitment,” said Clark Hampton, their adviser and a Moore School assistant professor. “The team competed against top schools from across the U.S. Winning a national championship enhances the reputation and raises the profile of our students, the University of South Carolina, the Darla Moore School of Business and the accounting department.”

All six students agreed the competition was a great opportunity to network with employees from Deloitte, a major international firm, and work on their public-speaking and presentation skills in front of more than 100 audience members.

“The coolest thing about the competition was in talking to one of the largest accounting firms in the world, they were receptive to our ideas,” Gulibon said. “You have five undergraduate students [and a graduate student] who have barely taken audit classes and yet they really found value in the things we had to say, the ideas we had.”

Four of the six students had never taken an audit class before the challenge began.

With their first place win in the Deloitte challenge, each student won a $2,000 scholarship.

The Deloitte National Audit Innovation Campus Challenge is sponsored by Deloitte and the Deloitte Foundation. Deloitte employs more than 240,000 people in 150 countries providing audit & assurance, tax, legal, risk and financial advisory and consulting services to many of the world’s most admired brands, including 80 percent of the Fortune 500 and more than 6,000 private and middle market companies. 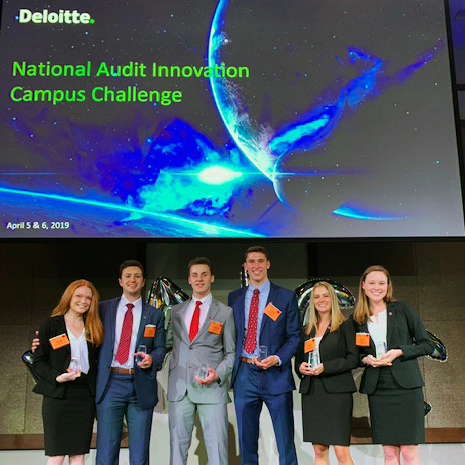 “The coolest thing about the competition was in talking to one of the largest accounting firms in the world, they were receptive to our ideas," said Aaron Gulibon, one of the winning team members and a junior Moore School accounting and economics major.