Moore School alumnus Glenn Gonzales ('13 MBA) has combined his experience with the Air Force, flying and sales with his Professional MBA program business skills to launch Jet It, a company that sells jets to owners who purchase part of a plane with a setup similar to timeshares.

Gonzales, a lieutenant colonel in the U.S. Air Force, served on active duty for 10 years and has been a reservist for the past 10 years and counting. He was in an executive sales support role for Gulfstream Aerospace when he decided to enroll in the Professional MBA program at the Moore School.

“The primary purpose of my position [with Gulfstream Aerospace] was supporting sales efforts through flying, attending trade shows and speaking to the airplane as a technical expert,” he said. “There was a perceived element that as a pilot, I may not have the business acumen to sit down with the CEO and work through the financials associated with acquiring an airplane. I wanted to round out my resume to make sure the company viewed me as more than qualified for other opportunities.”

Gonzales said the Moore School more than prepared him for the business side as he’d hoped.

The PMBA “definitely rounded out my knowledge and experience with not only business but also human resources, finance, accounting, strategy and management of that strategy, marketing,” he said. “Each element of the program was incredibly instrumental in preparing me for leading Jet It in all aspects of the company. In the military, you never ask someone to do something you’re not willing or capable of doing yourself.”

After he finished his MBA in 2013, Gonzales went on to sell Honda jet planes in Greensboro, North Carolina. As he made aviation sales calls and presentations, he kept hearing from prospective buyers that while they loved the Honda jet, they didn’t want to buy a whole airplane due to the large upfront financial investment. That recurring conversation led Gonzales to carefully construct a business plan over two years for a company that would allow owners to own up to one-half of an airplane and choose a certain number of days they wanted to travel each year.

“There was nothing in the marketplace that was providing a service at this level at this particular price point with a 24/7 luxury no-cost concierge service,” he said. “I put on my fighter and corporate pilot hat and my MBA hat from the Moore School and created a sustainable strategy that would economically impact aviation consumers.”

While he established Jet It in June 2017, Gonzales spent more than a year fundraising and finalizing the business plan with his co-founder and Jet It President Vishal Hiremath. Gonzales resigned from his position with Honda in August 2018 and officially launched Jet It a couple of weeks later on Labor Day weekend.

Unlike other private jet rental companies that rent by the hour and ownership models that insist individuals buy an entire plane, Jet It’s owners purchase up to one-half of the plane and can choose which days they want to fly.

“With other programs in the industry, you can rent the airplane for a number of hours annually, but we live our lives by the day. Why limit yourself with costly and over-restricted hourly programs?” Gonzales asked. “We don’t live our lives by hours – we just know what we are doing on a specific day in the future. I learned how to communicate in the MBA program to understand what the customer needs.”

While the owners pay to have a share of the plane, that share entitles them to a low hourly operational rate for the days when they use the plane. Jet It operates the aircrafts when their owners aren’t using them to help offset the operating costs for owners.

Jet It had enough owners to purchase its first plane in December 2018. As of August 2019, Jet It has five planes but has plans to purchase three more by year’s end.

“Initially we had one share every couple of months, but now we’re closing shares every week, so we’re doing incredibly well. I’m excited about our growth, and we’re growing very quickly,” Gonzales said. “As far as total owners, we respect our owners’ privacy, but we keep a one-aircraft-to-five-owner ratio.”

While Jet It has focused mostly on domestic travel in its first year, Gonzales hopes to expand beyond North and South America to Europe and Asia in the coming years. Jet It owners typically use smaller privately owned airports, but some fly into larger ones like Boston Logan, Dulles, Dallas/Fort Worth and Charlotte Douglas international airports.

Gonzales credits his current success to the preparation the Professional MBA provided and said his return on investment has been “a priceless experience.”

“In a luxury industry, luxury being defined as a highly valuable asset which oftentimes comes with a level of scarcity, I’d say the education I received at the Moore School was a luxurious experience,” he said. “It has created an opportunity in life and experience that in some cases is considered a bit scarce.”

Gonzales said he didn’t think he could have prepared his business plan or closed some of his major deals for Jet It without the business skills he gained at UofSC.

“The soft skills I gained are more tied to the confidence knowing I could speak to some of these business aspects more in-depth and just to have that general knowledge of business,” he said.

Getting his business off the ground, Gonzales is using some of the other soft skills he learned at the Moore School like time management and balancing multiple responsibilities as he splits his time between Jet It, headquartered in Greensboro, North Carolina, and his wife and two daughters, ages 14 and 12.

“It’s definitely a balance and is challenging,” he said. “As a family, we consistently communicate the challenges before us, time and the lack thereof we may have, but we celebrate every victory, big or small.”

Lately, the Gonzales family has had many victories to celebrate as Jet It has continued expanding from east to west coast.

To learn more about Jet It, visit gojetit.com. 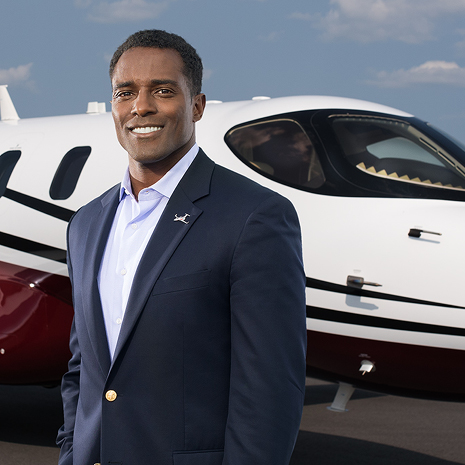 A year ago, Glenn Gonzales officially launched Jet It, a company that sells portions of airplanes to owners to use for a set number of days each year. He previously sold Honda airplanes and kept hearing from prospective owners that they wanted more flexibility in owning an aircraft.

Learn more about Jet It