Moore School management professor Anthony Nyberg was recently awarded a Fulbright award to research through a combination of qualitative and quantitative methods how organizations compete through human capital resources in Ireland. Human capital resources are the knowledge and abilities that employees use to help organizations compete in the marketplace.

A Distinguished Moore Fellow in management, the academic director for the Master of Human Resources program, the Riegel & Emory director and the interim director for the Center for Executive Succession, Nyberg plans to study how organizations compete through C-suite or chief officer succession and the strategic role of pay and performance management in attracting, retaining and motivating employees.

Nyberg and his fellow researchers have found that compensation systems can lead to better attraction and retention of key employees and ultimately to better organizational performance, he said.

Nyberg will use the Fulbright award to travel to Dublin, Ireland, to work with colleagues at Dublin City University on a regular basis in summer and fall 2020.

“I will be working with colleagues at Dublin City University to collect data from companies headquartered in Ireland,” he said. “The Fulbright award both provides funding for research and creates opportunities for engaging with business leaders that I would not otherwise be able to access.”

The research team hopes to gain access to the decision-making activities of senior executives and detailed information regarding both employee pay and performance. Nyberg said this will involve collecting both qualitative, anecdotal evidence and quantitative data.

In conjunction with the research he is undertaking with the Fulbright award, Nyberg published at the end of 2019 The Handbook of Research on Strategic Human Capital Resources with co-editor Thomas Moliterno. Fellow Moore School faculty Robert Ployhart and Patrick Wright were contributors to the publication, which explores how human capital resources are conceptualized and actualized.

While focusing on human capital resources, Nyberg has also explored how compensation can optimize group performance.

“The biggest lessons have been that compensation systems are necessarily complex, in part, because the responses to compensation are constantly changing,” he said. “The unintended consequences of pay decisions can be dramatic and destructive, meaning that compensation plans need to be continually watched and updated.”

“One of the most surprising things that we have learned about board decision making is that, despite these members being extremely smart and successful, many often do not use what we believe to be best practices in either CEO succession planning or decision making more broadly,” Nyberg said.

Published in the Academy of Management Journal in 2018, their research “has uncovered a number of best practices that should be used by boards in choosing their next CEO, as well as a number of the potential pitfall boards face in the process,” Schepker said. “Our hope is that boards will use this research to increase their probability of making the right CEO successor decision.”

Whether working alongside his fellow Moore School faculty members or soon his peers in Ireland, Nyberg focuses his research on a variety of management topics. In addition to the work he will undertake with the Fulbright award, Nyberg was recently named a Senior Fellow in the Department of Human Resources at the University of Tilburg in the Netherlands from 2020-2023. In this position, he will share his expertise with scholarly writing and will collaborate with assistant professors and Ph.D. students to help them publish in top-tier academic journals. 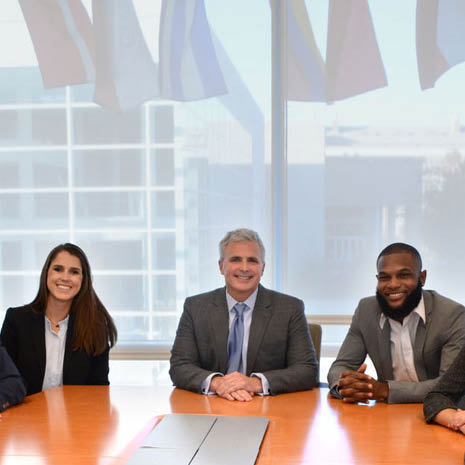 Management professor Anthony Nyberg was recently named a Senior Fellow in the Department of Human Resources at the University of Tilburg in the Netherlands from 2020-2023. In this position, he will share his expertise with scholarly writing and will collaborate with assistant professors and Ph.D. students to help them publish in top-tier academic journals.