After a two-year stint in the U.S. Army, Putnam earned a bachelor’s and master’s degree from what was then the College of Business Administration and would later become the Darla Moore School of Business. After earning his master’s in 1957, Putnam was invited to teach economics in the business school.

He would go on to spend close to four decades working for UofSC for three business school deans in various capacities: assistant to the dean, assistant dean, associate dean and senior associate dean. He was also a professor of economics during his tenure.

Putnam “was a relationship builder, was kind, generous, thoughtful and very witty – he was always making us laugh,” said Jeanette Ross, executive assistant to the dean’s office in the Moore School who worked with Putnam for more than 20 years. “He helped a lot of students stay in school; he was a very good counselor. He and [former Dean Jim Kane] were responsible for many successful fundraising visits made to support the growth of all areas of the business school.”

Beyond the business school, from 1970 to 1992, Putnam was UofSC’s faculty representative to the NCAA. Highly involved within the Midlands business community, Putnam engaged in legislative lobbying on behalf of the university in the 1980s.

To honor Putnam’s work with the business school, the Friends of the Accounting Department established in 1989 the William F. Putnam Scholarship, which is awarded annually to high-achieving accounting students.

In 1993, Putnam was named a Distinguished Alumnus Award recipient. Retiring in 1993, he was honored with a resolution from the South Carolina Statehouse honoring his service with the university.

He was the secretary of the Business Partnership Foundation within the business school for several years and even continued to serve after retiring until 1998. Founded in 1969, the Business Partnership Foundation assists with corporate sponsorships, scholarships and fellowships; provides support for grant applications and endowed faculty positions; and oversees 12 centers focusing on specific areas of research and real-world experience.

“From a professional side, [Putnam] led by example and cared deeply about the Moore School students and faculty as to their personal and professional lives,” said Sharon Gause, Business Partnership Foundation business manager who worked with Putnam for two decades. “He loved the Moore School and the university and instilled this legacy for all.”

Putnam was one of the organizers of a retired Moore School professors coffee club that met every week; he attended this coffee club the week before he died.

“Every day was fun if Bill Putnam was around,” Ross said. “He was a good friend to everyone he came in contact with. He was always willing to help those who needed guidance.” 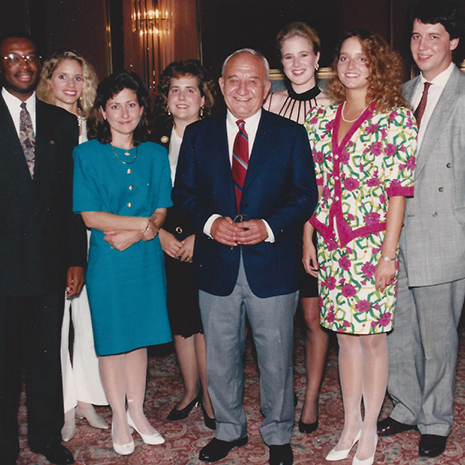 William "Bill" Putnam (center in the photo) worked at the Moore School for close to 40 years in various administrative roles and as a economics professor. He was known for his sense of humor, support for students and colleagues, fundraising efforts and for his overall dedication to the business school.