Timothy Finch (’12 MBA) and Alice Jilling Finch (‘90 psychology UofSC, minor in business administration) have made a provision in their will to provide $100,000 to the Moore School to support future undergraduate scholarships for students who have proven they are hardworking and eager to learn.

The love and commitment the Finches have for the University of South Carolina began at a young age. Tim Finch attended Gamecock football games with his father, and Alice Jilling Finch spent time on campus with her family while her father was a Ph.D. student.

With their dedication to the university, the Finches decided to support future students enrolled in the Moore School “because giving students the chance to receive a quality education is the best way for us to make a personal difference in the lives of  others,” said Alice Jilling Finch, a financial analyst with Atrium Health in Charlotte, North Carolina.

The Finches see their contribution to the Moore School as an investment in the state and beyond.

“The Moore School has a tremendous story to tell in South Carolina and on the world stage,” said Tim Finch, a vice president with Wells Fargo in Charlotte. “I hope our donations continue to tell the story by allowing gifted students the opportunity to attend the Moore School and use their education to make meaningful impacts in their chosen field.”

“My father [Michael Jilling] loved learning and was driven to obtain more education in order to become a professor after discovering his love for teaching,” Alice Jilling Finch said. Now retired, he “still often goes into ‘lecture mode’ when he has a captive audience. He truly always had an open door for his students and developed a great rapport with them. In the early years, he often could be found kicking a soccer ball around with students on the weekends.”

Elizabeth Jilling was also passionate about education. As a South Carolina elementary school teacher for 21 years, she understood her job was more than just  standing in a classroom and teaching. It was about trying to make a major impact on students’ lives.

“The impact of receiving the scholarship was life changing,” Alice said. “My family benefited from the generosity of others, and I want to pay it forward. Because this scholarship is in honor of my parents, it is important to me that recipients have the same driven attitude and desire to improve themselves and others.”

It is also important to the Jillings that the scholarship benefit students from South Carolina.

“Tim and I both grew up in South Carolina, and although we currently live in Charlotte, we still have a strong attachment to the state,” Alice Jilling Finch said.

She said her father and mother had no previous affiliation with South Carolina until Michael Jilling began his Ph.D. program, but they fell in love with the history and people of the Palmetto State.

“After my dad received his Ph.D., he had job offers all over the country, but they stayed in South Carolina,” Alice said. “[The qualifier that scholarship recipients be South Carolina residents] was added in honor of their affection for the place they chose to call home.” 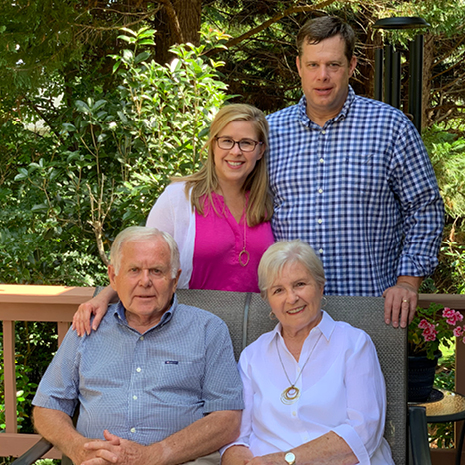 Tim Finch and Alice Jilling Finch committed to a future scholarship to support students who are hardworking and eager to learn in honor of Jilling Finch's father, Michael Jilling, a Moore School Ph.D. alumnus and UofSC Upstate and Moore School professor for more than 30 years.

Learn more about ways you can give to the Moore School