Like many college students, junior William Mendoza loves coffee. However, Mendoza’s passion for coffee diverges from other students since Mendoza’s parents cultivate coffee in Mexico.

Mendoza grew up in Myrtle Beach, South Carolina, but moved with his family at age 11 to his parents’ hometown in Guadalupe Victoria, Chiapas. He attended school in Mexico for four years, but he said he was dissatisfied with the quality of learning he received.

“The education wasn’t horrible, but since I lived in such a small community [with limited resources], and I was a high achieving student, it was definitely subpar,” Mendoza said.

He said he often told his aunt and grandma, who still lived in Myrtle Beach, South Carolina, about the meager education he was receiving in Mexico. Before his junior year of high school, they offered to let Mendoza live with them and return to school in the United States. Mendoza said the decision to move back to South Carolina was an easy one.

“I told [my parents] this was the best decision for my future,” Mendoza said. “Neither one of my parents was able to get a college degree because of their limited opportunities, so now me [succeeding in my education] has become one of the most important things to them. So much so that they were willing to send their 15-year-old son off to a different country to get a [better] education.”

With high aspirations for himself, Mendoza decided after high school to apply to UofSC as an international business and operations and supply chain double major.

“I made my decision based on the reputation of [UofSC’s] international business program,” Mendoza said. “Graduating with this major will play a huge role in my career plans for the future.”

Even though he was admitted to UofSC as an in-state student having attended high school in South Carolina, the financial aspect of attending a big university was daunting for Mendoza. As a first-generation college student, it is difficult for his parents to support him financially because of the high exchange rate from pesos to dollars. Mendoza also did not want to ask his aunt and grandma to support him financially through college because they had already done so much for him in high school.

Thankfully, Mendoza has received financial aid from a variety of need-based entities, including the Gamecock Guarantee grant, the South Carolina LIFE Scholarship and federal and state need-based grants. These funds cover most of his tuition and fees, however, they do not cover the cost of housing and living expenses.

For the 2019-20 academic year, he received a Moore School scholarship from The UPS Foundation. This scholarship prevented Mendoza from having to take out additional student loans because it subsidizes the cost of off-campus housing, Mendoza added.

Beginning with the 2018-19 academic year, The UPS Foundation created the UPS Global Scholars program with a $150,000 donation to strengthen diversity among students studying international business and has committed a total of $450,000 for the program’s first three years at the Moore School.

“UPS cultivates a diverse and inclusive environment and recognizes it as core to their business innovation in a global, interconnected marketplace,” said Karen Brosius, executive director of the Moore School’s Folks Center for International Business.

UofSC and the Moore School is the pilot university for the program, which seeks to award scholarships to undergraduate students and fellowships to graduate students from underrepresented backgrounds. The program also enhances partnerships with international universities that send students to the Moore School, said Romaine Seguin, UPS president of global freight forwarding and a new incoming Folks Center board member.

“The international emphasis fits extremely well with UPS’ international strategy,” said Seguin, who was also a first-generation college student. “Also with the program, we have the ability to attract very talented students to possibly have a career with UPS.”

The UPS Global Scholars program is making a difference in students’ ability to pursue their education and commit to international business.

“I truly believe that I wouldn’t be able to attend this university without [these scholarships],” Mendoza said.

Removing some of the financial burdens of attending college will allow Mendoza to focus more on his studies.

Mendoza plans to use his international business degree to import his parents’ coffee to the United States. He thinks his second major in operations and supply chain will help him understand the coffee farming and import/export processes from a business mindset. Also minoring in Portuguese, Mendoza hopes to travel to Brazil soon to learn their coffee harvesting techniques, as they are the number one producer of coffee in the world.

Ultimately, Mendoza hopes to take his degrees and experiences from the Moore School and combine them with his love for the coffee in Mexico to start a business that will support his family.

Mendoza is proud to be a South Carolina Gamecock and student of the Moore School. He said the classes he has completed thus far have given him confirmation and confidence that he chose the right school and major. He also feels extremely supported by UofSC faculty and staff, he added.

Mendoza also said that one of the most important things he’s learned during his time at UofSC is that the sacrifices he has made, like leaving Mexico and taking out loans to support himself, will one day be worth it.

“The business school has made me push myself to give my personal best,” Mendoza said. “It has taught me to work hard for my goals, and it has solidified my belief that I belong in the business world.”

Being the first person in his family to go to college, let alone a university in the United States, is a major accomplishment for Mendoza.

“Ever since I was a child, I’ve always wanted to go to college because I knew that it’s the best way to obtain a good job and a secure future,” Mendoza said. “After living in Mexico and learning about coffee, I was even more certain than ever that I had to go to college.”

Having heard about the lack of opportunity that prevented his parents from receiving a college—or in his mom’s case, even a high school— education, Mendoza is extremely motivated to earn his degree from UofSC.

“It would mean the world for [my parents] to see me graduate,” Mendoza said. “And I intend to make them proud. I know that when I finally accomplish this, I will not only feel as if I did it for myself but also for them.” 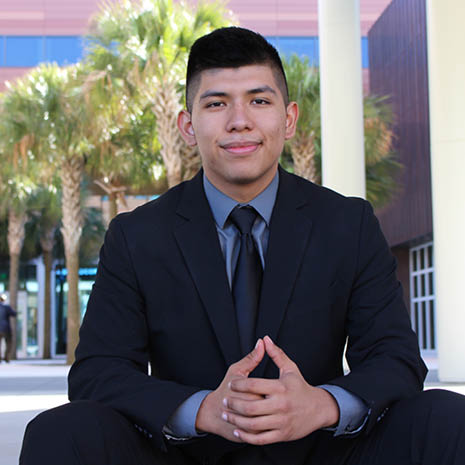 First-generation college student William Mendoza chose international business and operations and supply chain for his majors so he can someday go into business with his family in Mexico to cultivate and sell their coffee beans. Mendoza, a junior from Myrtle Beach, South Carolina, relies on financial aid to help him pay to attend UofSC. The UPS Global Scholars program provides support for Mendoza and a number of other students to strengthen diversity among students studying international business.