The Darla Moore School of Business is experiencing huge payoffs after a strategic new direction for its Office of Career Management that was implemented in conjunction with a curriculum overhaul four years ago.

Entering into the fourth year of this strategic initiative, the Moore School saw historic job placement rates and increases in starting salaries. In 2019, undergraduates who reported employment outcomes indicated that 84 percent – the highest in history – were employed within 90 days of graduation. Average salaries for reporting undergraduates were $57,837. In 2014 before the new curriculum shift from two years to four years, reported undergraduate salaries 90 days after graduation were $47,920, and reported job placement was just 62 percent.

“The numbers indicate the true success of the Academic Excellence Initiative, which was fully implemented in fall 2016 by [Moore School] Dean Peter Brews,” said Georgia Doran, senior director of the Moore School Office of Career Management. “The increased academic rigor, one of the four points of the initiative, has directly increased the value of our product – students – in the marketplace. We are producing more qualified graduates, and employers are willing to compensate them accordingly. This higher placement rate indicates not only increased excellence in the classroom but an enhanced ability to put theory into practice across industries.”

A strategic restructuring of the Office of Career Management was done in tandem with the 2016 curriculum shift that included doubling the OCM staff to 16 from eight staff members.

As part of the new strategic plan, the Office of Career Management began requiring the eight-week BADM 301: Careers in the Global Economy career preparation course for sophomores instead of juniors. Launched originally as an elective in spring 2009, the course became a requirement in 2011 for all Moore School undergraduates. The course teaches students how to do a thorough job search, helps them create personal marketing materials they can share with prospective employers, assists them in developing interview skills and instructs them on the strategy of networking and personal branding.

In 2011, the Office of Career Management offered 20 sections of the career preparation course; in the past year, they offered 51 sections. Every section has approximately 40 students.

In addition to the five new undergraduate career coaches and changing the requirements for the career preparation course, the office created the employer relations team as part of this new strategic initiative. Established in 2017 within the Office of Career Management, the employer relations department was designed to build relationships with a diverse group of employers. A director of employer relations, Jane Willis Mayer, was hired, and a team of existing employees and new hires was in place by early 2018.

Separated by industry areas, companies looking to hire students or recent graduates have one key contact from the team. The employer relations team members have networked to build relationships with more than 450 partnering companies. The team works with the employers to ensure they’re participating in appropriate recruiting initiatives based on their stated hiring needs.

An added benefit to this relationship between the employer relations team and company representatives is the Moore School staff are privy to when organizations are first hiring, what specific skills they are seeking and how best to prepare students to be competitive for these positions.

“In the current rapidly changing marketplace, business students are likely to be hired for a role that doesn’t exist currently or is significantly different than in past years,” Willis Mayer said. “For this reason, employers are looking for teachable, adaptable students, and it's our job to ensure they know they will find this level of preparation and readiness at the Moore School.”

The employer relations team has recruited more companies to attend the Moore School’s Career EXPOs, job fairs where students interview for internships and full-time positions; the first EXPO was held in 2005 and included 22 employer attendees who were only recruiting full-time graduate students. The fall 2019 Career EXPO featured more than 130 companies who interviewed and met more than 1,500 participating Moore School undergraduate and graduate students. More than a third of the employers scheduled campus interviews in conjunction with the event.

The Office of Career Management credits their strategic restructuring of their department for a 29 percent increase in employer attendance and a 32 percent increase in student attendance between the 2017 and 2019 Career EXPOs. In that same time frame, the number of non-Career EXPO recruiting events scheduled by employers for the Moore School increased by 40 percent, and student attendance at these events increased by 45 percent.

“The increase in student engagement is critical for overall Office of Career Management success, as our students serve as the ‘product.’ We know that our employers are looking for early career talent that is functionally based, data proficient and analytically capable,” Willis Mayer said. “We have that, and when our employers engage with our students, they are thoroughly impressed by how prepared they are. They also consistently say that our career preparation course and one-on-one career coaching produces candidates truly ready to engage in the recruiting process.”

This increased level of engagement also means Moore School students are interested in working for the companies the Office of Career Management are recruiting, Willis-Mayer said.

To track those they’re recruiting, the employer relations team has worked to create an elaborate database for partnering companies using the Salesforce software platform. They track everything from which companies have hired the most Moore School students and graduates and who has come to their Career EXPOs to which companies tend to hire at competing universities. The employer relations team has a short- and long-term strategy for employer outreach, and Salesforce is key in tracking and evaluating their progress, Willis Mayer said.

Developing “a graduate truly ready to engage with top-tier employers”

While the employer relations team is intentional in their recruitment, the companies are eager to hire Moore School students.

“There is a symmetry between the increased academic rigor and the increased efforts of the Office of Career Management for career preparation,” Doran said. “Together they develop a graduate truly ready to engage with top-tier employers.”

Doran noted the higher SAT scores for incoming freshmen and said bright students are coming in and are being held to higher standards. The Moore School is seeing results from these increased expectations, including the increased academic rigor, focus on data analytics and proficiency, more enhanced career preparation and the minimum 3.0 GPA required to stay in the business school, she said.

These factors are leading to the higher employment rate and higher salaries 90 days after graduation.

Another success is that more students in the Moore School are graduating in four years, which means they are incurring less student loan debt and are entering the job market sooner.

In May 2019, close to 61 percent of Moore School students graduated in four years or less – the highest ever for the four-year rate.

While many career preparation efforts have been focused on the undergraduate programs, graduate career education efforts have also been enhanced. Each Moore School graduate program has a dedicated career coach, and an 8-10-week career leadership and development series is offered for each program. Weekly training sessions cover major career topics and relevant market trends.

Similar to the undergraduate historic job placement numbers and higher salaries 90 days after graduation in 2019, the full-time MBA program saw 84 percent of reporting full-time MBAs with jobs and saw average reported MBA salaries increase to $95,398 in 2019.

“The Darla Moore School of Business and the Office of Career Management are both definitely on an upward trajectory due in part to the intentional choice of running all decisions through one single filter: ‘Is this best for the student?’” Doran said. “Our undergraduate and graduate students are co-investors in their Moore School education. We want our Moore School students to know that we are fully investing in them and their future success.” 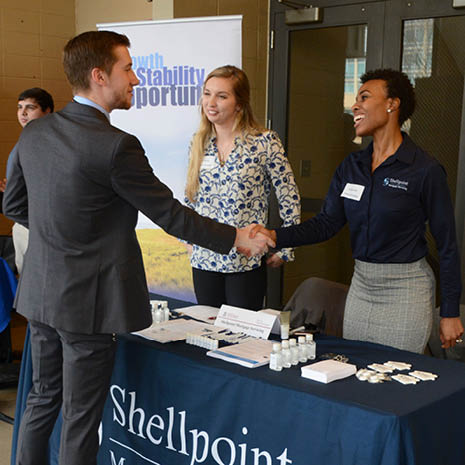 Moore School's Office of Career Management is increasing the ways it engages with undergraduate and graduate students and partnering companies.