Moore School professor Sherry Thatcher has been appointed as the incoming editor for the Academy of Management Review. Thatcher, chair of the Moore School management department, will assume full editorial responsibility for all manuscripts in summer 2020 with her new appointment.

Thatcher, who has been on the Moore School faculty since 2012, is also the J. Henry Fellers Professor in Business Administration.

Thatcher said she feels honored and appreciates being named the editor of the Academy of Management Review, one of the leading journals in the management and business fields.

“The position provides me with the opportunity to increase the number of unique voices and perspectives in the area of management theory development,” she said.

Thatcher understands the rigor of the journal and knows what it takes to publish in the Academy of Management Review, as she has published four articles in the journal as well as in other top journals in the management and business field.

Her most recently published research focuses on how new employees are integrated into their new workplace cultures.

Published on the Academy of Management Review website in September 2019, “Integrator or Gremlin? Identity Partnerships and Team Newcomer Socialization” looks at new employees, who they bond with and what it means for the team.

Thatcher wrote the paper with Danielle Cooper, a management associate professor at the University of North Texas, and Kevin Rockmann, a management professor, and Shora Moteabbed, a management assistant professor, both from the George Mason School of Business. Their paper explores two factions within offices – those who want to integrate new employees to the team’s mindset and those who want to sway the new person to their way of thinking that is likely separate from the overall team’s mentality.

“When someone is new to a team, there is a period of time when they’re trying to make sense of where they fit in and how they belong,” Thatcher said. “We’ve noticed in a lot of research that there is a focus on the newcomer and what they do to get integrated. But the incumbents and existing team members may also have an agenda in terms of getting the newcomer to identify with their own agenda that’s not necessarily in the best interest of the team overall.”

The new employee doesn’t always know who has the best interests of the team at heart, so they may be easily swayed to bond with the person who wants more people to agree with their individual view on a project or the team culture. However, ideally, incumbents would be promoting the entire team, which makes the team better and more cohesive, Thatcher said.

Cooper, Rockmann, Moteabbed and Thatcher researched more than 100 articles on the subject and concluded that “it matters very much who is proactive in approaching a newcomer,” Thatcher said. “To talk about the newcomer’s perspective, they have an agenda, too. They want to belong and are very susceptible to someone being proactive. The newcomer may be drawn to someone demographically similar to them.”

Thatcher concluded there is an abundance of empirical evidence that suggests if a new employee feels strongly about an incumbent who identifies with the entire team, they will likely identify with the entire team. Conversely, if they don’t connect with someone who supports the overall team culture or ideas, they may not end up as part of the team or will end up with a subgroup with an agenda separate from the team.

How a new employee’s needs are met are important “because they influence how the person communicates, their performance and job satisfaction,” Thatcher said.

Like her “Gremlin” newcomer piece, Thatcher focuses much of her management research on diversity and faultlines, group conflict, identity and team identity. Faultlines describe how team members split into subgroups on the basis of multiple aligned differences. When two individuals are like-minded, they will generally support one another, but they may have strong opinions about a group containing dissimilar others. However, if diversity is more equally distributed with many differing ideas, the group may have an easier time coming together, Thatcher said.

Her interest in these areas stems from growing up in Hawaii, and as a Caucasian female, she was actually a racial minority. Bullied by some because she was different, she said she was confused as an adolescent as to why differing racial backgrounds mattered.

“My initial interest is that I wanted to understand this issue, so my research is very focused on similarities, differences and identity,” she said. 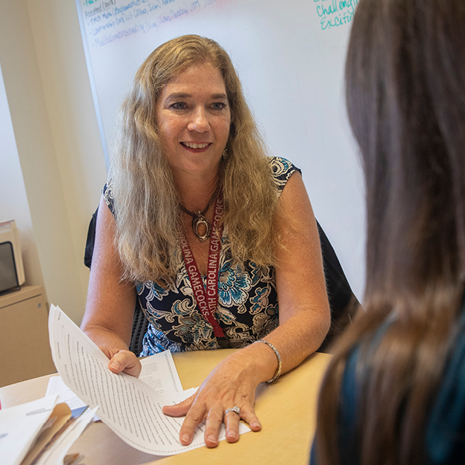