Madisyn Kellough, a 2015 broadcast journalism graduate, won a Southeast Emmy from The National Academy of Television Arts & Sciences for a feature package she created during her senior semester capstone course.  We caught up with her to discuss her time at USC and how it has impacted her career.

What inspired you to major in broadcast journalism?

On September 11, 2001, I was a third-grader who was home sick for the day. I woke up just in time to see the second airplane crash into the Twin Towers.  I didn’t quite understand what I was seeing, but like the rest of the country, I became glued to the news.  I needed answers.  At eight years old, I realized the importance of journalism.

A year later, my parents surprised my sister and me with a trip to New York City.   Visiting Ground Zero was surreal.  I was overwhelmed with emotion recalling the unforgettable image from just a year before.  As I poured over memoirs, letters and memorabilia of victims, I felt tears in my eyes.  These people all had incredible stories, and I wished I had been able to tell them.  At nine years old, I knew journalism was my dream.

Was there a defining moment for you as a USC broadcast major?

Yes. In one of the classes my sophomore year, Ainsley Earhardt was the guest speaker.  I had been watching her for years on Fox News.  As a USC alumna, she was the very reason I wanted to attend the school.

She gave wonderful advice about going the extra mile and refusing to give up on your goals. After class, she stuck around to answer my questions - for two hours!  I was star struck, but her personality made her approachable.  We exchanged e-mails, and she promised to keep in touch. And she did.

When I created my first South Carolina hype videos for Gamecock Productions, she posted them on her fan page.  When I interned at NFL Films in New Jersey, she invited me to come on the set of Fox & Friends First!  She gave me a tour of the set, let me sit in her producers’ meeting, and let me sit in the studio for the show. Ainsley still makes time to mentor me and I’ll be forever grateful.

What are you doing now?

I am an Assistant Content Integration Producer I at ESPN in Bristol, CT.  Our job is to essentially produce the network.  Content Integration is a multi-faceted group within the Studio Wraps department. We are responsible for managing the program content on 16 domestic, international, and digital networks.  Our primary focus is on live show-to-show transitions and delivering the best content to the ESPN viewer at all times.

How did your coursework at USC prepare you to do your job?

Everything I have learned about live production at USC is helpful.  We use ENPS, just like we did in school.  Senior Semester provided me with a better understanding of control rooms.  Knowing how to stack a show has been beneficial when producing the network.  It’s good to understand how the SportsCenter producer’s minds work so I can properly direct traffic their way.   Every decision made has to be for the betterment of the network. It’s a lot of responsibility, but my school experience has equipped me with confidence.

Who was your most influential faculty member?

There are two faculty members who greatly influenced me during my time at South Carolina, Rick Peterson and Harvie Nachlinger.  They were great mentors and crucial to my success in Senior Semester.

I really appreciated their teaching styles.  They never simply told us how to do something but encouraged us to think for ourselves. Now, due to this style, I am able to quickly think on my feet in tough situations.  This is vital to anyone’s success regardless of their career.

Senior Semester was an intense course, but definitely worth it.  The experience is as close to a local news job as you can get.

Our semester was the first in the new building.  The technology and studio are incredible.  Rick and Harvie found innovative ways to make the show different, and they pushed us every day.  There was not a day I left the journalism building feeling as if I hadn’t improved in some way.

For instance I covered some of the aftermath of the flood by traveling with Operation Blessing to a flood victim’s home.  Ralph was a 66-year-old Navy veteran whose home was ruined in the flood, and he could never move back into it.  He had cancer, and his immune system was too weak to handle damage from the mold.   His yard was filled with his belongings, memories, and treasures.  I asked him if he had lost or recovered anything of extreme importance.  He simply said, “I’ve got my wife.  She’s all I need.  Everything else is just stuff, and stuff accumulates.”

That is the kind of experience Senior Semester gives you — the kind that can’t be taught in a classroom.

Besides the 2016 Southeastern Emmy, have you won any other awards for your stories?

I was nominated for two Sports Video Group awards in Atlanta, one in 2013 and one in 2014.  I haven’t submitted much of my work to anything.  However, ESPNW has picked up two of my pieces; the SEC Network has aired one of my features on two different occasions and has featured more of my work online.  I have also had pieces air on Fox Sports South.

What’s next in your future?

I’m not sure what my next career move will be.  ESPN is an incredible company that has provided me with several shadowing opportunities in different departments.  From traveling to NYC to shadow E60 producers to sitting in on an NBA Tonight radio show, there are a plethora of fields that intrigue me.  I love reporting and I have an extreme passion for storytelling.  Right now, I am trying to take advantage of my resources at ESPN by picking the brains of the several talented people who work here.  Learning about their experiences, career paths, and current jobs has been eye opening.  I’ve only been here since February, and I feel I have changed and grown so much.  I don’t know what’s next, but I can’t wait to continue working hard and see. 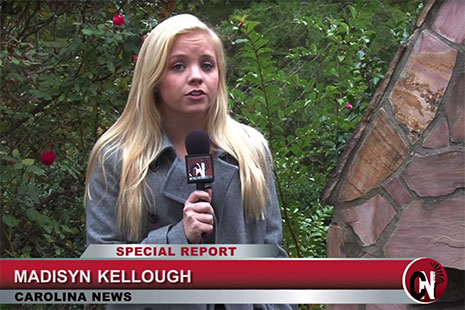 From Sorrow to Joy

"From Sorrow to Joy" won the Southeast Emmy Award in the College/University Student Production General
Assignment caterory in Light News. View photos from Madisyn's time at USC as well as from her night accepting her Southeastern Emmy.