Posted December 18, 2018
By Abe Danaher
Top photo: Four members of the Grimes family at the 2018 Family Weekend event in the J-school: Morgan, Randy, Adrian and Erika.

Twenty years ago, 1-year old Erika Grimes sat in her highchair babbling in a language that neither of her parents understood. Her mother, Adrian, stood listening to her first-born child’s chatter and watched as her husband Randy bent down in front of Erika, his face just a few inches from hers.

“I just remember thinking, ‘are you serious? You’re going to make her say Gamecock?’” Adrian says. “But sure enough, she was trying!”

Today, Erika can do more than say Gamecock — she is one. As is her sister Morgan, both her parents, and starting next year, her brother Jared. And like their parents, the Grimes children have each found their calling in the School of Journalism and Mass Communications. It would seem the university — and the J-school — have become something of a family tradition.

The Grimes family story doesn’t actually start at USC. Instead, it starts in May of 1988, the year Adrian graduated from USC and landed a job at a news station in Charleston.

Randy, who had graduated three years before, was WCSC's master control operator when the news station hired Adrian. Despite both of them being broadcast journalism majors from USC, they did not know each other, as Randy graduated the semester before Adrian transferred to USC. But they instantly bonded over their Carolina connection — and the fact that Adrian had interned with Randy’s dream employer, WIS in Columbia.

Randy and Adrian still laugh about their time as students learning under Dr. Lee Dudek inside the walls of the Carolina Coliseum.

Randy cracks up as he describes the professor’s trademark look: a red sweater (“the only sweater he had”) and a coat with a watch that he would wear on top of his sweater sleeve. Dudek wasn’t an easy professor, but he was instrumental in making them the professionals that they are today.

“He was just no nonsense,” Randy says. “If you were in his class you had to listen, pay attention and learn. But really he’s like a grandfather that’s just stern — he really loved you, but he was just tough.”

Though neither still works in broadcast, they haven’t strayed far from their journalism roots. Adrian is the manager of external affairs for the Medical University of South Carolina’s Center for Telehealth in Charleston, where she manages marketing communications and relations for her department. Randy is the head of the film and media arts department at Trident Technical College and brings much of what he learned at USC into his own teaching.

They say that the school gave them a leg up over other applicants when applying for their first jobs and even over their coworkers once they received those jobs.

“I know I went to a good college because I was totally prepared,” Adrian says. “I got my first job a week out of college. I know it was because I already knew how to do everything. They didn’t have to train me.”

She says it also helped her in an even bigger way — by encouraging her to find her voice.

Discussions about current social issues in her journalism classes, along with support from USC, inspired her to learn more about what was happening in the world around her and to find a social issue that she was passionate about.

She found that issue in Nelson Mandela’s fight against apartheid in South Africa.

Adrian became involved with a group on campus that built shantytowns behind Russell House to protest the ongoing racial dispute in South Africa. The experience was transformative and helped her realize her own identity as she demonstrated to defend others.

“Even though, you know, I was a black girl at USC, it’s kind of where I found my blackness,” Adrian says.

Try as she may, Erika can’t remember her father’s face in front of hers as he tried to teach her the word “Gamecock,” but she can remember her ride to the elementary school each morning.

She has witnessed her father’s fandom her entire life. Through good and bad, her dad has watched every game — cheering if they won and yelling if they lost. She makes sure to note that there were a lot of rough years for Carolina’s team, leading to a lot of distasteful, one-sided conversations between him and the TV. But through it all, his dedication never waned.

“He will stick with them through whatever,” she says. “Wins and losses, he just loves Carolina. He’s Mr. Gamecock.”

“I’ve followed them for a lifetime,” he says. “I’ve been a fan through the good times and the not so good times — the 0-11 seasons. It’s been tough, it’s been tough to be a Gamecock fan.”

Through his passion, the Grimes children developed their own special love for the university. When it came time for each kid to pick which college they were going to attend, there were no questions – they all wanted to be Gamecocks.

“They grew up in a Gamecock house,” Adrian says. “I tell people Randy raised three Gamecocks. But I always hoped to let them know that they could go to any college they wanted to go to. I never wanted them to feel pressure to go to USC.”

She says that the kids would always ask about the school, but that there was nothing bad that either she or Randy could say about it. That, along with the university’s strong journalism program, made their decision easy.

“Some people kind of look at our family like, ‘oh did they force you to go since both of them did?’” Erika says. “And they really didn’t. They were just very encouraging because obviously they love, love, love the school.”

Like her parents, Erika found a place in the J-school, pursuing a major in public relations. After completing her freshman year, she was able to share an experience with her two younger siblings that her parents couldn’t: an idea of what it was like to be a student at USC in the 21st century. She was honest with them about the challenges they’d face in their first year.

“I told her the run-down here,” Erika says, recounting a conversation she had with Morgan during Morgan’s junior year of high school. “It’s very different, you have to get adjusted and it’s really big. I warned her of all those things, but she told me, ‘I want to come up there with you.’”

Having a sister at USC made Morgan’s transition a smooth one.

“It was really helpful having her,” said Morgan, a public relations major. “I’m sure she would have wished she had an older sister to help her.”

Morgan is excited to give that same assistance to Jared when he comes in the fall. Like his parents and sisters, Jared also has his eye on the J-school, possibly as an advertising major. Morgan says that she has already started offering advice and that she plans to take him to different events on campus during his first week to make sure he gets assimilated into the campus environment. And, just as she and Erika did her first year, she and Jared plan to live together.

“I’m excited, because it’s my brother,” she says. “I don’t have to deal with extra roommate drama!”

Now that each member of the Grimes family has their own unique experiences as students at USC, conversations at the dinner table are a chance for each to share their own stories and thoughts on the university.

“I think it’s just special that we can all think of Carolina, and we all have the same loves,” Morgan says. “We love the school, we love the football — and we have our individual things we love about it.

More so than that, all five of them have made the J-school an integral part of their Carolina experience. And Erika and Morgan know that it’s preparing them for their future careers.

“It means everything,” Erika says. “I think it’s really the foundation for all of us.”

For Randy, it’s a little more than that. The university has given him a team to love, a wife to love, three children to love, and a bond between all of them that runs almost as deep as love. In USC, he has found something that has positively impacted his entire family.

“I’ve always identified it as my school,” says Randy. “And now, with them there, it’s our school.” 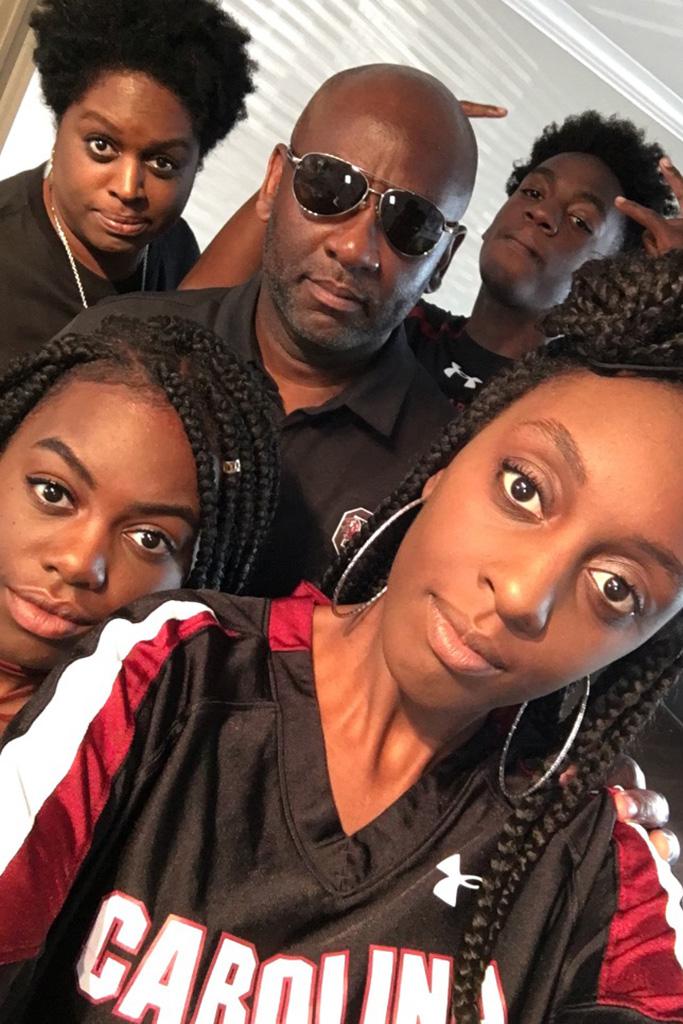 From the Coliseum to the new J-school building, photos of the family's journey through the years.