Editor's note: David Robinson graduated from the School of Journalism and Mass Communications in 1996 with a bachelor’s in advertising and public relations. During his time in the J-school, Robinson participated in the school’s first Maymester to New York City. He credits Dr. Jon Wardrip and Lou Brierley (both deceased) for mentoring him. Robinson said that it was “always cool” to have class in the Coliseum, which was the old home of the journalism school, and that he “loved that place.”

As a student intern working in the sports information department in the mid-1990s, David Robinson learned his way around the back hallways, training rooms and offices at Williams-Brice Stadium.

That familiarity — and a whole lot of Legos — came in handy this year when he and his 15-year-old son, David, decided to build a replica of the University of South Carolina football stadium.

He used more than 5,000 of the small plastic building blocks to construct the field, stands, ramps, press box, coaches’ offices, scoreboard and the rest of the stadium. The creation, which stands 13 inches high and sits on a 42-inch square piece of plywood, is easily recognizable as Williams-Brice.

Robinson, who earned his degree in journalism and mass communications from Carolina, is a lifelong Gamecock — both his father and grandfather attended, too. He says he has always been a huge sports fan, traveling to bowl games and to Omaha for the College World Series championships. His Charleston home includes a USC-themed man cave.

But he didn’t spend too much time with Legos as a kid; he was more likely to be playing outside or participating in sports. Yet last Christmas, he received a set of miniplastic building blocks to create an NFL football stadium, and it gave him an idea.

“It got me thinking that I’d love to build Williams-Brice — someplace that means a lot to me.

"One day, I started putting pieces together, trying to get a feel for what it might entail,” Robinson says. “It blew my mind how large it would be if I really wanted to do it. It had to be big to make it to scale and to have the details I wanted.”

He started looking for Legos at flea markets and on eBay, until his co-worker at the software firm Blackbaud told him about the website bricklink.com, where he could find just about any type, size or color Lego piece from suppliers around the world. He figures he ordered about 5,000 pieces.

The toughest and most frustrating part to build? The ramps, since it was difficult to find rounded pieces that accurately resembled the walkway.

His favorite part? The press box or The Zone on the south side of the stadium.

After five months of building the stadium, he thought he was finished with Legos, but then his story took off on social media. Thousands retweeted his photos of the creation, including former Gamecock stars Alshon Jeffery, George Rogers and Marcus Lattimore. Reporters called for interviews. He and his son were recognized in restaurants.

“I felt like if I wanted to ride the wave I needed to do it now,” he says.

So, his thoughts turned to baseball, and about 3,600 Lego pieces.

“I’m probably a bigger baseball fan than football fan. And Founders Park is a beautiful park. There are great features to it — the hill and the playground and the walkways,” he says. “It’s completely different than Williams-Brice, so it was a chance to do something different.”

The Lego baseball stadium even has a model of the outfield case holding the two national championship trophies.

Robinson brought the stadiums to Columbia in August for the Gamecock Sports Preview at the Alumni Center and the Lego fan expo at the Convention Center. The social media buzz continued, with fans lining up to take photos.

So what’s next? He says he had been tossing around the possibility of building the Carolina Coliseum, but when he was in Columbia he jogged to the Horseshoe.

“I took about 100 pictures of the Horseshoe going all the way around. That would be cool. And now that I’ve found those Legos with the brick texture, I could put those all the way around for the walkway,” he says. “It’s just a matter of scaling that. How big should the houses and the library be? It could get to be massive if I’m not careful.” 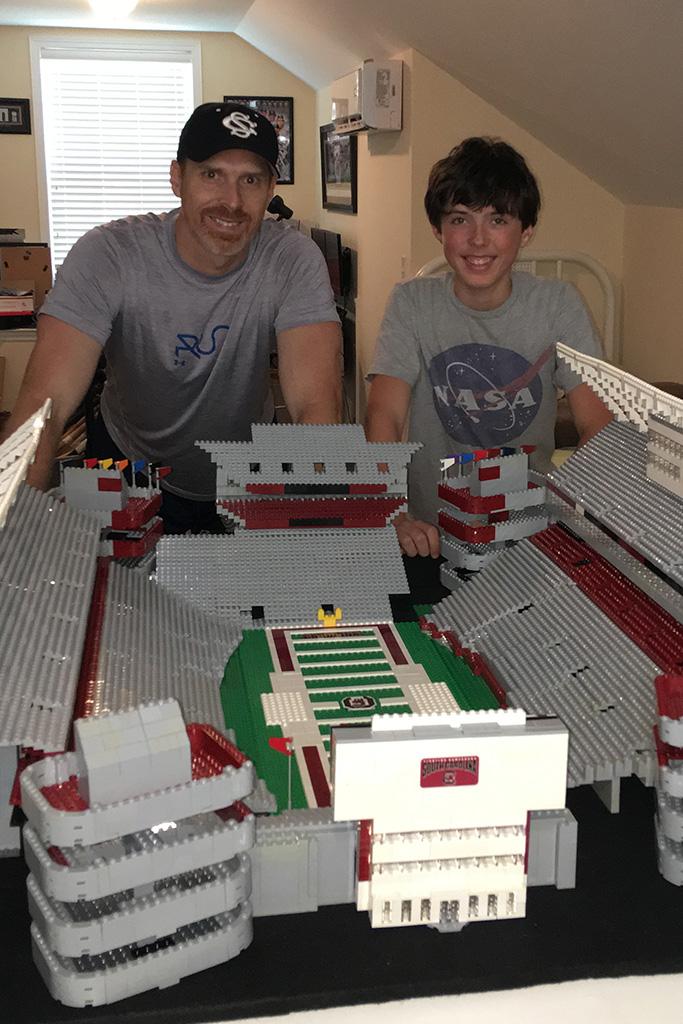 View the Lego stadium creations by David Robinson and son.