Ernie Grigg, an instructor in the School of Journalism and Mass Communications and the faculty advisor of The Carolina Agency, was selected as PR News’ 2018 Platinum PR Winner for Educator of the Year at their Platinum PR Awards luncheon on September 21.

This awards luncheon celebrated achievements within the marketing and communications fields, and featured over 500 guests displaying excellency in their respective fields.

“The PR News Platinum Award is a big thing,” said Grigg. “It’s not quite the Oscars of public relations, but it is a pretty big industry award that people get excited about.”

Grigg was recognized because of the two new PR courses that he developed in the SJMC, his commendable record of job placement, his advisement of students as they created USC’s Think Twice campaign, and most specifically, his leadership in transforming The Carolina Agency from a student-run organization to a full-scale firm.

“One of our goals is to make sure that everyone in the professional world knows what fabulous students we have,” said Dr. Andrea Tanner, director of the School of Journalism and Mass Communications. “This award just helps show them that we have a top-notch program with top faculty in the field.”

While attending the luncheon, Grigg met many professionals from around the country who were interested in hearing more about TCA and the students involved in its work.

“It put South Carolina on the map with people that are going to be hiring our students,” said Grigg.

The award also reaffirms Grigg’s decision three years ago to leave his public relation’s firm in New York City to teach at USC. He said that when he had announced his decision to leave his company for teaching, he had received some odd looks. Yet when given the award, many executives from his past company were among the first people to congratulate him.

As TCA’s prestige grows, Grigg’s next goal is to begin attracting clients outside of the local Columbia market. He also said that the agency is working to expand its services within the University by collaborating with more schools and departments.

By increasing the influence of TCA, the students involved will become more prepared for the professional world.

“Ernie brings the professional world of public relations into the classroom so that there are no surprises for students when they land their first professional job,” said Tanner.

Outside of TCA, Grigg is focusing on continuing to create new classes within the journalism school’s public relations program. He is very excited about collaborating in the future with the School of Library and Information Science to expose his students to data synthesis and analysis. 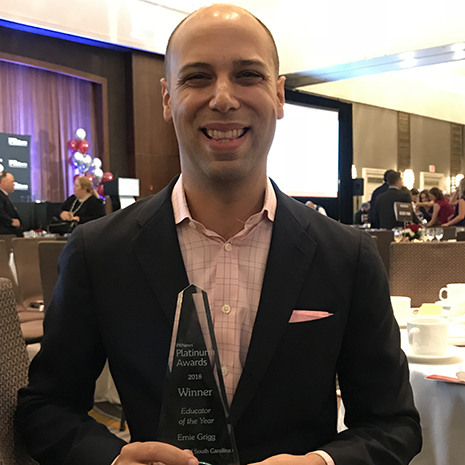 Educator of the Year

Ernie Grigg was selected as PR News’ 2018 Platinum PR Winner for Educator of the Year at their Platinum PR Awards luncheon on September 21.