Brook’s life in journalism: Front page to back page

Nina Brook might as well have been born reading a newspaper.

The Atlanta native has done it all in the field of journalism. She went to college at Georgia State to be educated in the principles of journalism. She worked at three different newspapers, including The State in Columbia. She has taught high schoolers at Richland Northeast High School how to be journalists, and just this past year she began as an instructor in the School of Journalism and Mass Communications.

But Brook’s affinity for journalism began well before all of this. It began with her father.

“Growing up, news was a part of our life,” Brook says. “We read the paper, we watched the news, we talked about news. So definitely, that steered me into the career.”

Her father was a journalist before she was born, and by the time of her birth, he worked in public relations. Growing up, he introduced her to the power of news and sparked her life-long interest in current events, news, public policy and politics.

Brook laughs as she thinks back to 11th grade.

“I was the most popular person in the class,” she says. But her high school popularity wasn’t for any of the reasons that you would suspect — she was popular for watching the news before school every morning.

Her AP U.S. history teacher allowed students to start each class discussing current events. The teacher would not start class until the students ran out of current events to talk about. Brook, who watched the Today Show every morning with her family, ensured that class never started on time.

This love for current events and news in high school led her to major in both PR and journalism in college, and eventually pushed her to work in journalism. But, after many years as a journalist working long hours doing exactly what she wanted to do, Brook realized that her career had to change.

This was 14 years ago, as her oldest son neared high school.

Brook began hearing other parents talk about how excited they were to attend their children’s sports games. She realized that her position for The State newspaper would never allow her to see her kids’ games.

At the same time that this was swirling through her mind, she was asked to speak on a panel at Richland Northeast to students who, she was told, were interested in journalism. But once the panel began, Brook realized that their eyes were glazing over with disinterest.

She said to them, “Why are y’all here? If you want to major in journalism, why aren’t you asking any questions?”

As it turned out, they were drama students with no interest in journalism, and were only there because their career counselor required them to be. So, Brook shifted the panel discussion toward a broader talk on higher education and the work world.

After the panel ended and the drama students had filed out of the conference center, a teacher who had been seated in the back of the room raced up to her and asked if she had any interest in teaching. Before Brook could answer, the teacher told her about a journalism magnet program the school was starting and declared that Brook had to teach in it.

The teacher was right.

“If the school that your own family is zoned for is starting a high school journalism magnet program right when your eldest child is going to high school and you need a more family-friendly job, how many more signs do I need that this would be perfect for me,” she says.

And so she began a 13-year high school teaching career that saw Brook become the school’s newspaper adviser, year book adviser, literary magazine adviser, and for a while, broadcast adviser.

“I just really had a community of young people that were in that space all day,” says Brook. “I could tell that this high school and this program was going to do something special.”

She was able to teach her three oldest kids. And just like her father had for her, she was able to spark a love for journalism in at least one of her own children.

Her second youngest, a freshman at Wofford College, just joined the staff of the school’s newspaper and his first story was on their front page. Brook was all smiles as she proudly shared this, and she made sure to reminisce back to her time teaching him. He was more of a page designer in high school, she says, despite an obvious knack for writing.

Brook now finds herself in the third stage of her career. This past year she accepted a position to teach at USC’s J-school. Now in her first semester, she teaches public relations writing and writing for mass communications. She enjoys teaching at the college level and loves how thorough and complete her instruction can be compared to her 13 years teaching high school.

But there are still days where she misses being a journalist. She misses being the first to know something and sometimes, she finds herself thinking back to “good, big news days” and remembering how much fun she had covering the day’s breaking news.

She vividly remembers her late night drives home from The State. She remembers passing the houses on her street, seeing the lights on inside, and thinking to herself, “Wait ‘till you see what I have in the paper in the morning!”

Before she is completely overcome with nostalgia, though, she also thinks back to all the kids she has taught — even her own kids — and the difference she has made in showing them a profession that she has always loved. She thinks back to her children’s sports games that she got to attend, and the time she had to do things outside of work.

Despite turbulence and changes in the field, Brook remains content encouraging any of her students to pursue a career in journalism.

“I think it is a very good profession,” says Brook. “It is a different profession from the one I entered in the 1980s for sure, but it’s still a really great place to combine communication skills and maybe another interest you have, like I did with politics.”

And that applies all the way down to her children. She smiles when I ask her if she encouraged them to pursue journalism like her father had encouraged her.

“If any of my children wanted to go into it, I would be very happy for them to.” 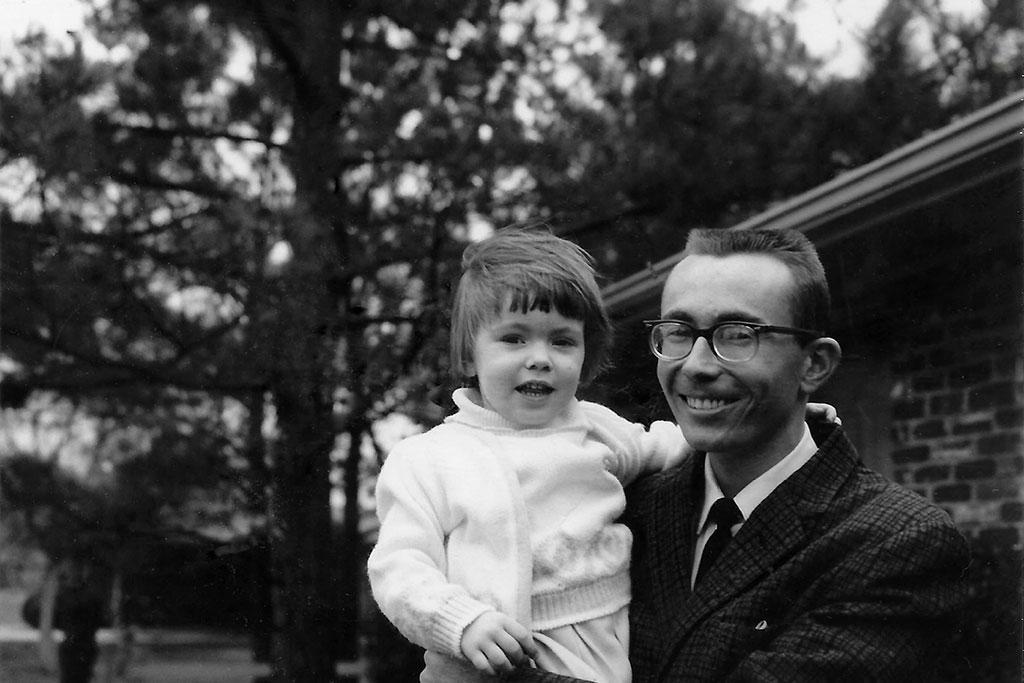 Photos of Nina Brook through the years.