When Henry Edwards’ professors recommended he attend the 2018 AdPR Academy over spring break, he had no idea how much he’d learn — or how much he’d stand out. After an intense week of lectures, networking and a case study presentation, the senior public relations major was named the program’s MVP.

AdPR Academy is a week-long program designed to address the diversity gap in advertising and public relations. Launched in 2017 by the Ad/PR department at the University of Georgia’s Grady College, the boot camp-style academy is held on the campus of Moxie, one of the largest marketing agencies in Atlanta. This year marked the first year that the USC College of Information and Communications signed on as a partner. Six CIC students, including Henry, made the trip to Atlanta to see what it was all about.

“The AdPR Academy calls itself a communications boot camp, and you really get that feel,” says Edwards. “Those long days, those long hours — it takes commitment and dedication. All of the things that you learn and implement, whether it’s in the case study or an interview that you get by networking with those professionals, you get to hone those skills and abilities.”

Throughout the week, teams of students worked on case studies to showcase what they learned. Edwards’ group was tasked with developing a plan for how to increase young professional engagement for an Atlanta-area nonprofit. Because of his persuasive speaking skills, his team chose him to close the presentation.

“I spoke really well and I was able to relax and take a deep breath and talk to the judges,” says Edwards. “In doing that, I realized how much I learned during the week. It really resonated with the judges. That was part of the reason why I was chosen as the MVP.”

Edwards believes that the comprehensive education he received as a public relations major in the CIC gave him the skills he needed to make a positive impression on the judges. He’s hopeful that the college will continue its partnership with the academy so that other diverse students can expand their skill sets.

“It is very important in the area of diversity for someone to be able to see themselves in the positions that they want to be in, and you get a great experience with that at the AdPR Academy,” says Edwards. “The professionals that they bring in are either working in diversity and inclusion or are minorities or small-business owners, entrepreneurs, communicators. They look like you, they feel the way you feel, they understand what you understand, and that makes it so much more meaningful when you’re listening to them and shaking their hand. That’s extremely valuable. You can’t put a price on that.”

Dr. Tom Reichert, dean of the College of Information and Communications, was excited to send so many students to this year’s AdPR Academy.

“We value diversity, and it’s one of our priorities,” says Reichert. “We’re pleased to involve our students in this opportunity, and we hope to continue participating in this program and others like it.”

What’s next for Edwards? The Charleston native is currently sharpening his skills as an intern for Alison South Marketing Group in Aiken, an opportunity that’s providing him with a broad range of experience.

“It makes me excited to wake up in the morning knowing that there’s something new to tackle or there’s a new job,” says Edwards. “One day I’ll be writing press releases, the next day I’ll be doing blogs, or I’ll be going to take photos at a client’s event.”

The internship has allowed him to grow, and he hopes to continue that growth by working for a marketing or public relations agency after graduation.

Regardless of where his next step leads, Edwards says the most important thing he’s taken away from his time at the CIC — and his experience at the AdPR agency—  is to be persistent.

“No matter what you’re doing right now, even if it doesn’t relate to what you see yourself doing in the future, don’t give up on that, because you’ll blink and you’ll see it through and you’ll be amazed at what you can accomplish in a short amount of time.” 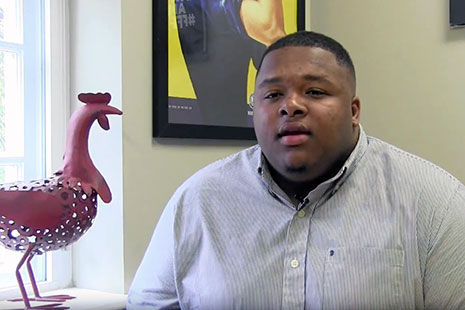 Images from the 2018 AdPR Academy.