There were tears. There was laughter. And there were many rounds of applause. At the Buchheit Family Lecture, hosted by the School of Journalism and Mass Communications, Pete Souza and his audience of almost 1,000 became bound by emotion as they experienced history through his lens.

“I just want people to understand what the role of the White House photographer is and the importance of creating a visual archive for history,” said Souza in a meeting with student journalists earlier that day. “Every single picture I ever made either in the Obama administration or the Reagan administration are saved in perpetuity through the national archives. First and foremost, my role is as a visual documentarian.”

This documentation was on full display hours later at his lecture, yet Souza did not want the pictures to speak for themselves. Instead, he used them as windows into important historical moments that revealed the presidents’ personalities and advanced his lived historical narrative.

Souza organized his lecture by breaking down the two presidencies into smaller subtopics. For the Reagan administration, this included topics titled: “Nancy,” “Commander in Chief,” “Rancho del Cielo” and “Gorbachev and the Soviet Union.” For President Obama, to whom Souza was much closer, the subtopics were more personal. They included: “The Best Day of His Presidency,” “The bin Laden Raid,” "The Worst Day” and “Family.”

When discussing the Reagan presidency, Souza flashed to a picture of Nancy Reagan sitting on her husband Ronald’s lap as he donned the long white beard and floppy red hat of Santa Claus. Immediately, there were chuckles in the crowd at the sight of America’s president dressed as Father Christmas. Yet, it was not until Souza revealed the story that led to the photo that the crowd’s chuckles turned to a ruckus laughter.

He told of how he was at a private party with the Reagans when the host, Mrs. Wick, approached him. He remembered her explaining that each year someone at the party dressed up as Santa Claus and handed out gifts. That year, she had told him, it was “Ronny’s” turn.

For every period of laughter during the lecture, there was also an equally powerful moment of silence, pierced only by the choked-up voice of a man whose job it was to record this country’s lowest points.

Following a slide titled “The Worst Day,” Souza showed his photos from the day of the Sandy Hook Elementary shooting. On screen, Obama’s somber face looked down. On stage, Souza stopped speaking mid-sentence. There was no sound emitted from the crowd.

A room filled with laughter just minutes earlier now froze, locked together by cuffs of sorrow. Souza’s photos from that day collectively took the audience back six years, when 20 first graders had been shot and killed.

“Sorry,” said Souza unexpectedly, before finishing his recollection of the day. “I always think it’s important to show those pictures even though a lot of times I have a hard time keeping my emotions in check.”

This emotion, though, is what led the crowd to give Souza a standing applause following his final words and to stay long after the lecture had finished to ask him questions.

In the first question to Souza during the question and answer period, the gravity of the lecture was framed by the emotions that it evoked in all attendees.

The audience member thanked Souza and said, “You made us laugh, you made us cry.” 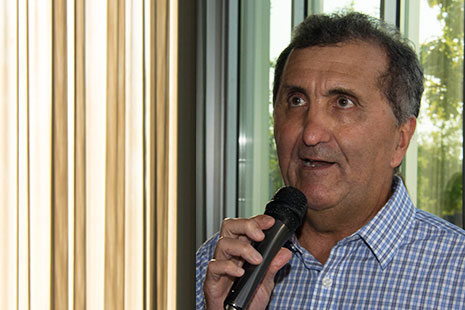 Souza’s lecture was sponsored by the Buchheit Family Endowment, which provides undergraduate scholarships and graduate and doctoral fellowships to students of the university’s School of Journalism and Mass Communications.

The Buchheit Family Lecture Series was created in 2000 in honor of the late Phil Buchheit, who was the former president and chairman of Mid-South Management Company and the former publisher of the Spartanburg Herald-Journal. 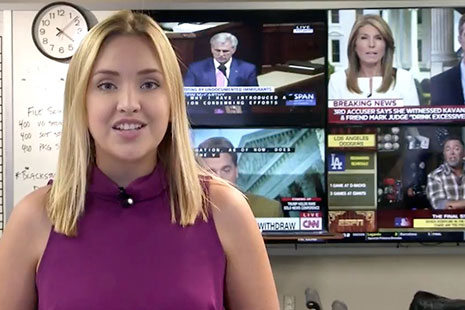 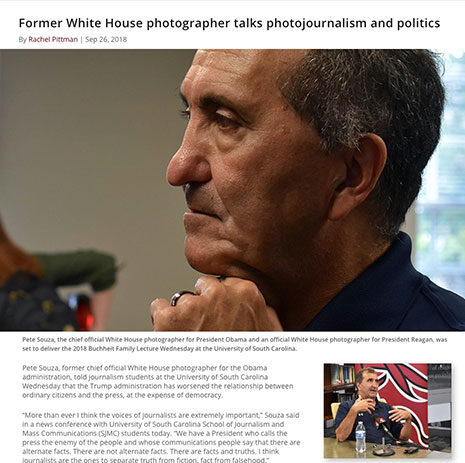 Rachel Pittman photographed Pete Souza and wrote a recap of his visit for the Carolina News and Reporter website. Pittman is a senior multimedia journalism major. 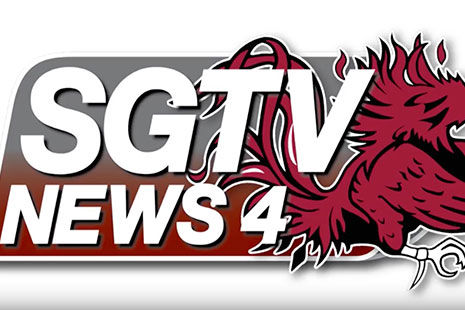