When the School of Journalism and Mass Communications officially launches its sports media concentration in the fall, seasoned journalist Manie Robinson will be ready to teach students everything he knows about storytelling. That’s because the former reporter, columnist and video producer has been hired as the J-school’s first-ever sports media instructor.

Football fanatics might recognize his work. Robinson spent 14 years at The Greenville News, including time on the newspaper’s Clemson beat. He’s racked up more than a dozen South Carolina Press Association awards for video production, breaking news, enterprise reporting and opinion writing. In 2018, he was named South Carolina Sportswriter of the Year by the National Sports Media Association.

The sports media concentration’s versatility — it will be offered to all six of the school’s majors — is one of the main reasons Robinson was drawn to it.

In addition to his many journalism accolades, Robinson has an MFA in sports storytelling from Wake Forest University, has completed three short documentaries and has a feature-length film in production.

Assistant professor Kevin Hull, who leads the SJMC’s sports media efforts, first met Robinson over lunch a few years ago. Immediately, he recognized the potential the journalist had to transform the school’s sports curriculum.

“I left that lunch and said, ‘We’re hiring that guy someday because of all the things that he can bring,’” Hull says. “He can do documentaries, he can write. He fits so many needs that we have and is going to be a big part of this as we move forward.”

Hull got his wish — Robinson was brought on as an adjunct for JOUR 361 in fall 2019. Now a full-time member of the faculty, he’s teaching introductory journalism courses in the spring and will shift gears to focus on sports-related courses in the fall.

Storytelling, Robinson says, is a lot like solving a puzzle. It’s not the final product that drives him but the process of getting there. He hopes that enthusiasm is something he’s able to pass on to students.

“There are myriad ways to tell a story and students have to find their way,” he says. “There’s no one right way to deliver the story as I learned working a competitive beat. There are some stories that you’re obligated to do that everyone’s going to do, so you have to have a unique way of telling it.”

FILMOGRAPHY
A Chip Off the Old Rock, 2017
The Collegiate Cartel, 2017
Sacred Site, 2018
Proper Pronouns (in production) 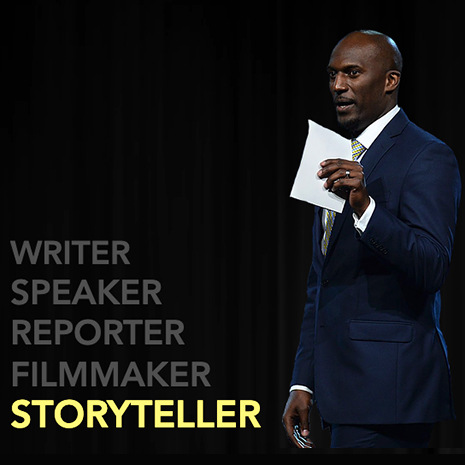