The Moore School’s Marketing Scholars Program provides undergraduate students hands-on experience with some of the top brands, including Coca-Cola, Sonoco Packaging Company, ESPN and Lionsgate. Specifically with Lionsgate, one of the leading entertainment companies in the world, teams of Marketing Scholars have worked on projects that involve top franchises like The Hunger Games and John Wick.

In conjunction with the Moore School’s Center for Marketing Solutions, the Marketing Scholars Program includes junior and senior marketing majors with high GPAs; most of the students have previously completed a quality internship. The students work on a semester-long, real-world marketing project.

For the past five years, teams of Marketing Scholars have visited Lionsgate Entertainment in Santa Monica, California, to work on projects that touch some of the movie industry’s biggest hits. Each of the Lionsgate projects the Marketing Scholars have undertaken have a research component, the meeting at the studio with key executives and delivery of an integrated marketing plan with a final presentation to executives.

Kozlowski said each of the Marketing Scholars projects have certain elements in common: they hold a high strategic importance to the entertainment company; they focus on a topic where college-age audiences are a key fan base; and Lionsgate personnel need to gain a deeper context and perspective that can only come from taking a step back and looking at the big picture. The Marketing Scholars also assist with initiatives that do not rely on large advertising budgets or A-list celebrities to promote the film.

“Lionsgate consistently works with [the Center for Marketing Solutions and the Marketing Scholars] each year because they do a great job,” Kozlowski said. “They dive into each topic with passion and commitment, and by the end of each semester, the students become experts at not just the subject matter in question but also the movie business.

“They put clear thought and care into crafting strategic insights and marketing recommendations down to a tactical campaign level, often including budgets and creative mock-ups. I don’t go easy on the students just because they are students, but they deliver on par with what I’d expect a top agency to deliver.”

“I am always telling my students how important it is to nurture relationships in the business setting,” Newsome said.

Due to a non-disclosure agreement, the students, Newsome and Kozlowski could not share specifics about their projects, but the students acknowledged they learned a great deal while working with the entertainment firm.

“From the very beginning, Lionsgate had extremely high expectations and treated us like business professionals rather than students,” said Chloe Erickson (2020 marketing and finance with a concentration in data analytics). “The best word to describe how consulting and presenting to them felt would be empowering.”

After an initial presentation to Kozlowski and some of her colleagues at the end of the semester, Lionsgate asked the students who worked on the project to later present to senior-level executives across the Motion Picture Group.

“This was absolutely the senior leadership of a major Hollywood entertainment firm taking 90 minutes from their extremely busy schedules to attend a presentation by our marketing students,” said Satish Jayachandran, Moore School marketing department chair and the James F. Kane Professor of Business. “The executives were engaged and asked numerous questions. They lauded the team on the insightful nature of the research, the data and the recommendations.”

The scope of the 2020 Lionsgate project challenged the students to utilize all of the skills they had gained as Moore School students.

“This project required us to use many of the technical skills we've learned during our time at the Moore School, including how to conduct market research, data visualization, analyzing and synthesizing survey results, etcetera,” said Nicole Welch (2020 marketing with a minor in sociology). “But it also involved the use of a lot of ‘soft skills’ which were equally as important — things like time management, communication, problem-solving and adaptability were all key to our success with this project and the Marketing Scholars Program as a whole.”

The students on the Lionsgate team said they felt like they were really part of a marketing agency during the spring semester; the students managed to visit Lionsgate’s headquarters in Santa Monica, California, just before travel was discouraged because of COVID-19. The rest of their meetings with each other and Lionsgate executives were virtually conducted because of the pandemic.

“We were all a team on the project, so the workload was fluid, which just meant a lot of Zoom calls so we could all see what we were working on,” said Gavin Bruns (2020 international business, marketing and management). “I took away a better work ethic and strong communication skills, along with a whole bunch of marketing know-how from [Newsome] specifically.”

“Each year the project scope increases in depth and sophistication,” he said. “To me, that means Lionsgate has great confidence in our students and the work they are producing.”

The Moore School and Lionsgate collaboration has resulted in unsurpassed real-world experiences for students while delivering robust and actionable marketing insights for Lionsgate, Newsome said.

Kozlowski said she and her colleagues have been so impressed by the work the Moore School students have provided Lionsgate that they have considered hiring students on at the studio who are looking to make a move to Los Angeles and want to work full time in entertainment.

Newsome “and I have worked together long enough that he’s already factoring Lionsgate’s working style and culture into his selection of who gets to participate in the Marketing Scholars Program — which means any student who’s selected for the program is both a strong general candidate and a person he sees as being of potential value to our studio,” she said. 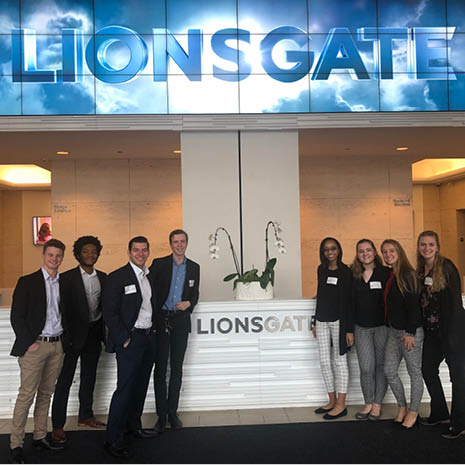